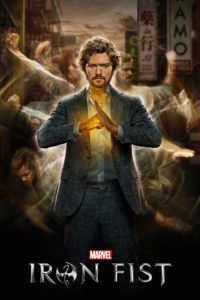 Two to three hours in a movie theater to enjoy a summer blockbuster like Iron Man or Captain America: Civil War is a rush of awesome that is becoming more and more common today. Thinking of the great Comic book heroes forces us to call to mind the same big movies and with great titles like Guardians of the Galaxy and the Avengers, movies about superheroes are getting better and better in their story-telling capabilities. With all of that greatness, however, I have glimpsed the comic book story future (also past, but we can do that one later) and its name is television series’.

I’ve been loving these full seasons of superhero awesomeness. It seems that the best way to tell a character’s backstory and rise to greatness, if not through books with pictures or without, is through television; more specifically, Netflix. Arrow, Supergirl, and Gotham have been gifting us impressive stories with depth that keep viewers wanting more.

What’s in a story?

The current fare has kept me up for the past three nights well into the morning hours to ensure that I finish everything Marvel in time for The Defenders, this summer. Besides looking spectacular, whoever’s been 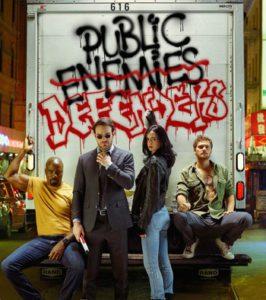 writing these things has done a pretty great job. With the exception of Iron Fist, I’d even say that the writing has been amazing (no offense, Danny, it’s just….you’re….well…..written to be a little stupid…sorry, man….I suppose that’s what 15 years of monk life is all about….that and your desire to be naked half the time).

With more shows looking to expand our compendium of great comic book heroes, there is sure to be something for everyone. Plus, with the great story telling, it sure beats the heck out of the two-hour thing. Speaking of two hours, why suggest that shows are better? Let me hit you with a three-part answer:

Exhibit A: More time for back story

Backstory is universally understood to mean: OH!-THAT’S why that guy/gal does the thing?! It’s vital to the story and to us dealing with the character’s motivations. It’s also the thing that we seem to lack depth of in each of the recent superhero movies…I mean, look at Batman vs. Superman…..really, the motivation to work together is that “you’re mothers had” the same name? Lame for motivation.

What we see in each of these television series are incredibly intricate details for the characters. It clearly informs us of their decisions and how we should really interpret them. This should be important to us because a character without motivation is just another Schwarzenegger movie (not to hate too much-I like most of those things, but for a very different reason). Moving on.

With more time for the back story, we see that there is far more for our characters to learn. Along with this learning comes growth; with growth comes acknowledging their great power and the great responsibility that goes with it (see what I did there?).

Ask any person who their favorite fictional character is and they’re going to give you any number of awesome heroes or protagonists with verbose and profound stories that delve deep into what makes them tick you can’t get that level of knowledge of a character from a movie….sorry, folks, but it’s true. Let’s take some more recent heroes like Harry Potter; he’s got, what, 10,000 pages dedicated to him? Katniss Everdeen? She’d got three books written with the entire text spoken from her perspective (sadly, this is what made the movies only so-so). We could go on, but I digress.

Exhibit D: More time for me to freaking like these people

There’s so much to be said for relatability in a character….I mean, SO much. Given that we’ve discussed more time for back story, this one seems redundant, but hear me out: the more time you spend with these flawed wrecks of humans (see exhibit 2), the more you realize that they’re just like us….but with ridiculously cool powers. I mean, naturally, seeing these people deal with this stuff for longer than the typical 30 minutes of rando feel-good stuff you see in movies allows us to see that they’re actually taking time to make these decisions, rather than our beloved Avengers who only have two hours for 8 different people to look like they’re actually considering the import of their actions (that’s another cool thing-all of the damage they did in New York is constantly discussed in these shows-so much fanboy drool for that).

It’s great that we get to take our time with these guys. I love seeing the hero win, but I love it, even more, when they lose before they win; movies do a great job of this (in the Monomyth, I think it’s the Major Setback), but the shows do an even better job because they have more time. It makes us love the characters all the more.

Without a doubt, the Marvel Cinematic Universe has shown that movies can be awesome (Sorry, DC, you have yet to prove you know what’s going on with episodic movie tales; take a hint from your shows), even when they retell a story that we know. Television, however, especially those like the Marvel/Netflix kind, have proven that they can deliver a more potent and meaningful rendition of some of our favorite heroes by using the one thing that movies lack: time. 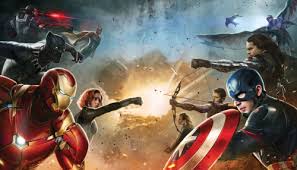