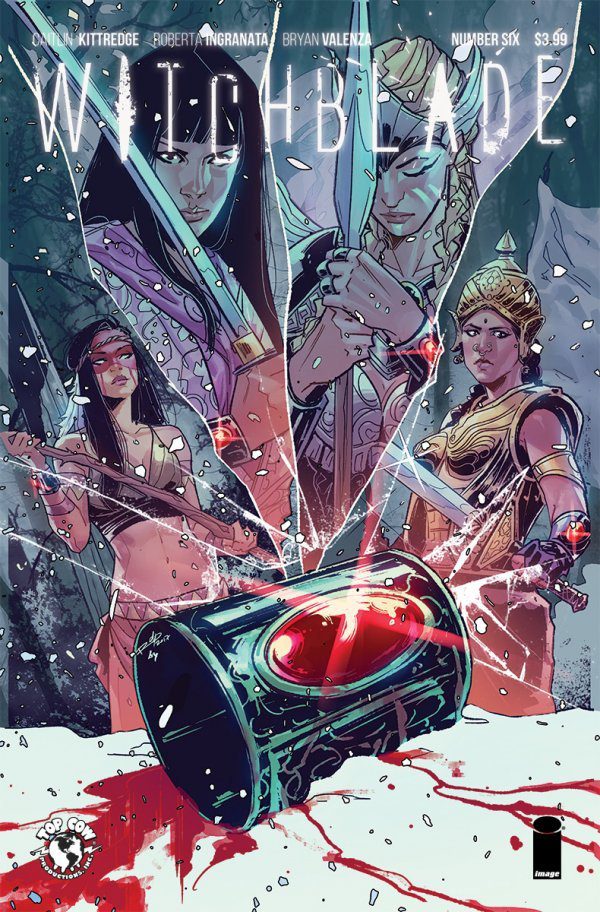 We have finally come to the end of the first arc for the new Witchblade run and it has been quite an experience for our protagonist Alex, as she has had to deal with not only the monsters of humanity but the demons that lay hidden in her city too. The main gist of the issue is her confronting the demon that has been messing up the city from the inside out. After the last issue where Alex was able to destroy a human trafficking housed by one of the cops that the demon controls, the demon who is named Leonetti has had enough of her. Seeing Alex grow from dealing with her anxiety and depression from past horrors has been one of the biggest joys in reading this run so far. She’s entered a new world where she has to take things at face value now that she’s the new Witchblade. Even though she wanted to run from this sort of power, I love how she didn’t take long to really try to embrace the use of it to help her do her job and bring justice for the people that need her and to weed out the corruption in the city.

A big standout here is how she doesn’t go into this fight alone. We know Alex can come off strong but its great to see she’s not stubborn to call for help when she needs it. The art team here has been really consistent on this run as they manage to help blend dark and bright colors to help set the mood in all the scenarios that have happened. It’s never overly grim and I enjoy how raw and wild Alex looks when she uses the powers of the Witchblade. When she confronts Leonetti, there’s a wonderful use with the colors where they make them flow and you really see the energy coming off of it as it engulfs the surroundings when the two of them go at it. The lettering they do for Alex when she talks to herself inside of her head is probably my favorite portion to read. It makes you understand how uneasy and shaky she can feel. But there’s always that part of her where she’s strong enough to always take things head on, regardless of how dangerous it is.

Alex is really just getting things started with her powers. As things have finally come to an end with one situation, others will loom ahead and time will tell if she will be able to keep on fighting the good fight. I may not know much about Witchblade prior to this run, but I can say that this is still a ride worth staying on.