It’s kind of taboo to mess with classics. Sure, we don’t mind developers putting a crisp HD layer to retro games, but to give a retro game from the 16 or 32 bit era a modern look – that’s a dangerous move for any developer. Yet, developer Lizardcube and publisher DotEmu have given gamers a real achievement in a great remake with a modern take on the classic Sega platformer Wonder Boy: The Dragon’s Trap.

Wonder Boy places gamers into the role of either Wonder Boy or Wonder Girl, who receives an unfortunate curse which mutates him/her into an upright-walking, fire-breathing lizard. From there, it begins a journey of trying to get this adventurer into his/her original form.

Even with this title being a remake, I cannot stress how similar it is to the original Wonder Boy III. In fact, with the press of a button you can immediately switch to the 1989 game’s retro graphics along with its original soundtrack. So if you want to experience the visuals of the Sega Master System, that option is going to be there.

But with that being said, the modern update of this game’s visuals and soundtrack is brilliant. The entire world of Monster Land has a charming and colorful hand-drawn look to it. And to say that the music is infectious is a understatement. I all too often caught myself humming away the music when I wasn’t playing it. 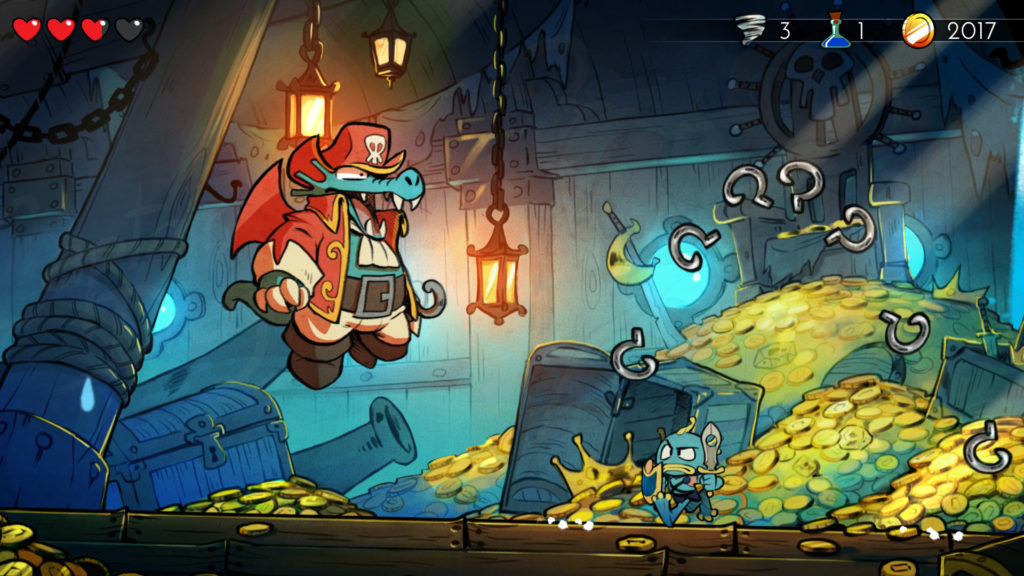 Boss battles can be pretty difficult. It’s worth stocking up on plenty of revival potions in case you fall in battle.

When it comes to the overall feel of the game, Wonder Boy controls more on the stiff side. And while that isn’t necessarily a negative, it is something to consider if one has a preference for a looser feeling platformer like Shovel Knight. And while I prefer the feel of the latter, I was still able to get a grasp for the game to the point that I no longer noticed how stiff it might have felt before.

The limited movement has a tendency make the game’s combat at times feel uninspired at times. There are special abilities like fireballs and boomerangs, but for the most part, I found myself having to get extremely close to enemies in order to get inside their tiny hit box. Expanding those hit boxes slightly would have saved some frustrating moments. Countless times did I find myself getting hit due to having to close that tiny gap to attack an enemy. And when every enemy is like that, it can become tiresome.

The overall world unfolds in a very unique way. While this game is certainly a more linear experience, it isn’t a level-by-level experience. The world branches off in many different directions and has so many hidden areas. It’s not often that such a small experience offers a thrill of exploration but I feel that was achieved here. 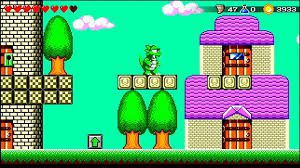 With the press of a button, you can have the retro experience of Wonder Boy III.

Exploring this world reveals something very quickly – Wonder Boy or Wonder Girl doesn’t have all of the tools and abilities necessary to beat certain enemies or traverse areas. So much of Wonder Boy is about finding shops to buy stronger armor, shields, or sword. And as you may already know, Lizard Man isn’t the only transformation Wonder Boy or Girl experiences. Defeating bosses results in a change in form and that change allows new areas to be explored. For example, the form of a mouse allows Wonder Boy/Girl to climb checkered blocks, even if that takes you upside on the ceiling.

I like this format of the game as it never allowed me to feel like I had gotten a full grasp of it. I was always having to adapt and change my strategies. And it is here that the sometimes uninspired combat is saved. By the time I had reached the end of the game, I felt like a combat master. And of course, if somebody ever feels the game is too easy, they can change the difficulty from Easy, Medium, and Hard. “Hard” is pretty unforgiving as enemies do more damage and less health replenishing opportunities present themselves.

I’m pleased with Wonder Boy: The Dragon’s Trap. It’s no wonder why it was an award winning platformer when it originally released in 1989. This modern update takes nothing away from that game. From the updated visuals and new soundtrack to a couple updates to levels, Lizardcube should be proud of the game it has made. While I found the game’s combat lacking, it never comes close to ruining this great game. Wonder Boy: The Dragon’s Trap is easily one of the most charming platformers in recent years and totally worth a buy.