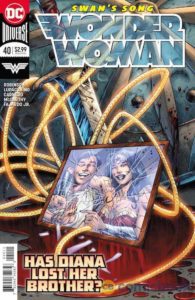 Wonder Woman has clipped Silver Swan’s wing but the new villain has vanished. While Diana and Jason track her down, Darkseid sends the Female Furies after another ancient relic. One that is being guarded by Steve Trevor and his crew.

I appreciate how focused this final issue of the story arc was compared to the previous two. Though we get a glimpse of the Female Furies’ battle with Steve Trevor’s team, Silver Swan’s origin was allowed to breathe a bit more. At first, I didn’t like what felt like Wonder Woman’s version of the song Stan by Eminem. But by the end of the issue I really felt like Swan’s words to Wonder Woman held weight and I’m totally up for seeing more of her. As for the artwork, despite listing two illustrators in the credits the issue had some great sequences from the first page to the last. There were some fantastic action scenes, with Wonder Woman crashing Swan into the ocean is a highlight. The bright sonic attack lighting up the dark ocean beneath a night sky really popped on that page. It was lovely, I just had to linger on those panels. This was a solid issue, which is a good sign coming off the previous Darkseid arc which was James Robinson’s strongest work on Wonder Woman so far. 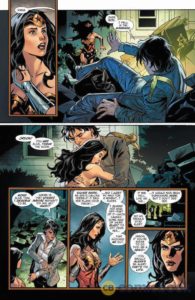 I’ve complained enough about Jason in past reviews, but I enjoyed how his storyline played off the main plot in this issue. It was a good contrast of Jason wanting to impress his sister who he holds in high regards, while Silver Swan lashes out at Diana who has disappointed her. Still, I agree with Jason’s sentiments by the last page. This was also a boring use of the Female Furies, which is a shame because it is always great to see them. Due to the vagueness of Darkseid’s plan the Furies’ fight lacked any sort of tension or excitement. I think my biggest complaint with Robinson’s run so far is that every big event that takes place in Wonder Woman feels rushed and inconsequential. This should be one of DC’s most important books right now but there is little to no talk about it online or by other creators. You would think Darkseid’s return would impact the rest of the DC Universe more than it has, though they did sort of explain why it wouldn’t.

Complaints aside, there was a lot of good to take away from this issue. Not just the fantastic artwork by Emanuela Lupacchino and Carmen Carnero, but Silver Swan may be a worthwhile rogue to add to Wonder Woman’s gallery. I don’t know what to think about the Darkseid side story, it feels like they’re stretching it out. But when they let James Robinson sink his teeth into the leader of Apokolips the results have turned out pretty damn good. When this comic book is allowed to focus on a single plot line it’s been solid.