Wonder Woman Come Back to Me #1 REVIEW 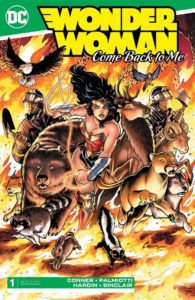 Wonder Woman Come Back to Me #1
DC Comics

Wonder Woman Come Back to Me #1 puts Wonder Woman in an unusual spot: sitting on the sidelines. Although she’s called into action more than once throughout the issue, she has to let her lover, Steve Trevor, go off on his. Not exactly a position she’s used to being in.

Yet Wonder Woman is able to handle herself in such a way that’s in line with who she is. She’s not frantic or over-worried. Wonder Woman remains confident under Amanda Conner and Jimmy Palmiotti’s watch. Though, like any hero, she finds a way to keep herself busy in order to keep her mind off of what she cannot control.

Chad Hardon’s artwork is a perfect fit for Diana. While her features appear to be softened on the cover, it’s evident when she and Steve take a trip to the beach that she’s not to be challenged. And Alex Sinclair’s accurately reflect wherever Wonder Woman is at each point in the story. In battle, things get dark, including the character, but while enjoying a vacation with Steve, everything in the world could not be brighter.

Wonder Woman Come Back #1 to me is a light read that gives those who haven’t read about the character much, but may be looking to do so with what appears to be a story that’s not impacted by the rest of the insanity in the DC Universe.