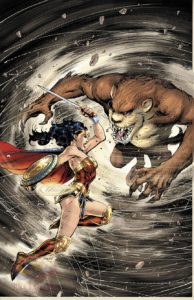 Circe and her army of trolls attack Themyscira so Wonder Woman seeks the help of the Tasmanian Devil, whom she previously had an encounter with.

A crossover between Wonder Woman and the Tasmanian Devil didn’t make a lot of sense till I actually read it. Taz is one of many guardians of a labyrinth that is located on Themyscira. In order to prove her self worthy of being an Amazon, Diana faced off against the devil. I liked the flashback meeting between the characters more than the actual Circe fight that takes place in the present. It was a great way to incorporate a Looney Toons character into the DC Universe. Out of all the crossovers, this is the only one that could become canon and get away with it. This was a fun story overall, and one that found a way to stay true to both characters, which is impressive. 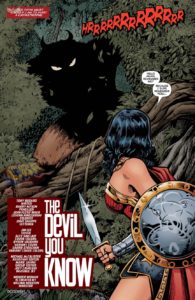 The DC/Hannah-Barera crossover comics now include a short story at the end of each issue that is done in a cartoonish style. The Martian Manhunter and Marvin the Martian one was my favorite so far because it feels just like a Looney Toons cartoon. In this issue it is more of an epilogue dream sequence that places the Loney Toons and Wonder Woman in the story of Iliad. I can’t say I enjoyed it very much. The short was very wordy, and Diana plays the damsel in distress throughout, which was odd. Writer Tony Bedard even ends the story with Diana remarking on her passiveness. There was also an exchange between Daffy Duck and Taz over Wonder Woman that was weird, it just didn’t work. Which is a shame because the main story was really good.

The art in both the main story and the epilogue was pretty good. At first I felt like Barry Kitson’s Wonder Woman was stiff, but later on the action poses were really good. The design of Taz was cool, he looked like a beast that you would find in a labyrinth. No complaints about the art for me.

Solid art and a surprisingly good main story make this a fun read. Though the epilogue isn’t offensive, it was still an odd way to end a Wonder Woman comic book. It doesn’t take away from the overall issue, which i did enjoy. I don’t think any of the prior crossover issues worked as well as this one.