Season 3 Episode 10 ‘The Other Woman’ Review

As we round the corner to the final lap of the season, with episodes 11&12 stacked together on Friday the 28th for a two-hour finale spectacular, it leaves very conflicting responses. On one hand, this season has been so exquisite, the writers and actors truly pushing themselves beyond the previously known limits of their skills and comfort zones, bursting into the stratosphere and weaving together this beautifully rich tapestry of story and emotion, forming truly one of the best seasons, of any show, I have ever seen. On that same note, because the writing and performances have been so incredible, doing such a stellar job of drawing the audience, the loyal faithful Earpers into the battle against Bulshar for not just Purgatory, but truly the fate of the world, we wish there were a few dozen more episodes! While I know the number of episodes for this particular show allows the team to deliver a wonderfully succinct chapter of the Wynonna Earp story, it still doesn’t make it any easier having so many off months waiting for our next season to begin. Entering the final quarter of the season, the stakes have never felt higher, the tension never more palatable, the holy shit moments have never been holy shittier, and I don’t think we’ve ever rallied behind Team Earp any more intensely than we are right now, Earpers Assemble! We’ve got an apocalypse to stop.

We begin the episode with a memory of Bobo’s peaking back to 1887, with human Bobo meeting with Juan Carlo who was dictating into his journal. Wyatt Earp was on his way to Purgatory, Juan Carlo tasks Bobo with going to the flats and deliver Peacemaker to the Champion while holding a gladius style sword. It’s unknown if this sword was melted down to make Peacemaker, if the sword was also called Peacemaker, or if the sword was just a symbolic highlight to the scene. Each time I’ve rewatched the episode since it aired (I’m at 5 at the time of writing this review) I’ve come up with more what if theories and officially have my head spinning over a 10 second clip of an episode, now extrapolate that across the entire episode, better yet the entire season, and you know how most Earper’s brains feel. Back in our time, we see the first appearance of Anna Silk, emerging from a cave or mine of some kind removing a hazmat suit calling for the chosen one. 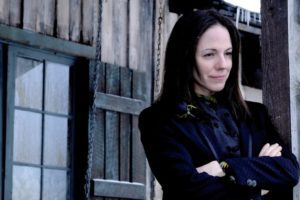 Wynonna is watching Bobo, who is being held in a giant terrarium like a prison cell, jumping back and forth between cryptic musings and spouting nonsense. There is a shot where Wynonna and Bobo are talking face to face, only separated by the cell wall, generating this incredible image where Wynonna’s reflection faintly appears to be superimposed on Bobo’s face. Both of them feeling lost and useless, suffering from despair and rage, like two sides of the same coin. April Mullen, director for this week’s episode, has a brilliant eye for subtle shots that tell a million word story effortlessly. Mullen also directly last week’s episode, responsible for the incredible shots of Wynonna against the wall with Doc’s face ‘trapped’ in it, his eyes projected on the wall on both sides of her, and the tragic claustrophobic images of Doc being buried throughout Wynonna’s hellacious Groundhogs Day.

Waverly and Jeremy team up on research, Waverly feeling defeated with what they’re up against. Jeremy tries to cheer up Waverly musing that they don’t have diddly squat, they have each other, and incredible calves. All the while, Bobo is swaying back and forth in the background of the shot, Michael Eklund’s facial expressions are exceptional, especially his confused reactions to Jeremy’s lines. During a recap of what they do know, Bobo makes reference to his flashback, ultimately sending Nicole to ask Doc about Maeve and his ties to Juan Carlo and a book. Wynonna and Charlie have a touching scene in the barn, Wynonna allowing herself to have some vulnerability, before being interrupted by Anna Silk aka Kevin, who promptly throat punches Wynonna and then says she’s going to help her save the world. Kevin will not reveal information in front of Charlie the civilian, who gets offended and storms off when a Wynonna gives in to Kevin’s request.

As Waverly returns to the Homestead, finding Kevin sitting in their kitchen eating pickles, the enigmatic Kevin reveals she’s from a secret group that monitors Supernatural events, looking after the balance of the world, supposed to only observe, never interfere. However, due to the apocalyptic level and being sick of the old boys club misogyny, Kevin goes against her team’s rules and comes to help the Earp sisters. Sending the sisters to a mine to retrieve Bulshar’s arm that would allow a synthesized weapon, though Waves and Wynonna would much prefer a riding flamethrower with cup holders, heated seats, and a dashboard hula girl. I was admittedly unfamiliar with Anna Silk leading to the episode, but she comes in guns blazing, trading some incredible quip rifts with Melanie Scorfano like she’s been on the show since the pilot. I was also quite convinced before I saw the actresses’ name, that Anna Silk was actually Mary-Louise Parker, the two could play a hell of a sibling duo in a project together with the familial looks and both possessing great comedic timing.

Doc and Haught, DocHaught? Kat Barrell’s character has to have the record for the most duos whose chemistry is so good it warrants shippable nicknames, WayHaught, WynHaught, DocHaught or HaughtDoc, and HaughtDolls. After establishing that Nicole is prepared for Doc should he cross any lines with a clip full of wooden bullets, the duo goes to seek out Maeve, a witch who was burned at the stake and is also kin to Greta and Mattie, the twin witches. Maeve’s spirit remains in their home enable to manifest in the form of fire. Meanwhile, the Earp Sisters battle a Revenant who is irradiated from the uranium mine, making him impossible to touch, and also has attached Bulshar’s arm to where he was missing, forcing the girls to retreat towards Mercedes Gardner’s home. 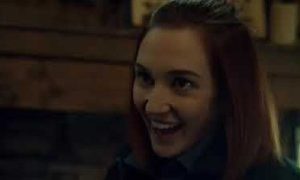 Maeve reveals herself to be a sarcastic rude mentally unstabled teenager, calling Doc Wyatt Earp’s boyfriend, mockingly repeating Doc, oh yeah, and possessing Nicole. As spectacular as everyone else and all the other scenes are in this episode, nothing tops the possession scenes. Kat Barrell is absolutely INCREDIBLE, delivering this exceptional layered character over herself, changing her vocal inflections, the cadence, facial expressions, body language, bringing an entirely different character into Nicole Haught’s body. Maeve’s lines are tried and true Wynonna Earp style, coming from the masterful writers Caitlin Fryers and Noelle Carbone, allowing Nicole to deliver some of the saucier, sarcastic one-liners for once. The performance really makes me want Kat Barrell to star as a psychopathic serial killer in another project, proving she would deliver a brilliant performance!

Doc eventually calls Jeremy to assist, the shock on the guys’ faces when MaeveHaught goes from debating giving Nicole a pixie cut to opening her shirt and showing off her bra declaring ‘Coppers down with Victoria’s Secret!’ Before jumping into Jeremy’s body, feeling up the body until it begins itchy revealing that Jeremy is apparently not purely human. Hold up witch ala flambé, what the hell did you just say? So not only is it confirmed that Nicole is purely human (getting rid of previously seen fan theories that Nicole is kin to Bulshar) but now it appears Chetri is not full human? Was he subject to similar Black Badge experiments that Dolls was? After Doc refuses to kill someone so Maeve can have a body and convincing her that killing Nicole herself wouldn’t work, Doc finds Juan Carlo’s journal, just in time for Maeve to exit Nicole’s body and cause the house to explode in flames. 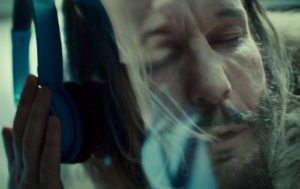 When Robin stays to watch Bobo, the two eventually bond over jazz music. When Robin reveals Stetson song is called ‘Like Wolves on the Fold’ to which Eklund’s timing and cadence with ‘I dig wolves’ amplifies the perfection that is Bobo Del Ray to a new level. Robin trying to figure out if Bobo is a good guy or bad guy. Mercedes reveals that Waverly and the ring healed Mercedes’ face. The Earps then fight the radioactive Revenant, losing until Waves commands control of the ring turning Bulshar’s arm into a Wii game (Waverly is really good at Wii) and choking the Revenant out, allowing the sisters to remove Bulshr’s arm from the body.

Charlie rescues Doc after responding to the fire, getting bitten and killed by Count Docula, striking with the shock and intensity of a horror movie villain. Nicole, seeing what Doc has done, is crushed, having defended him and fought for others to forgive him. You can feel Haught’s heartbreaking through the power in Kat’s performance, holding the gun on Doc but her kind soul forcing her hand to shake. Defeated and feeling betrayed she drops the gun, saying if she sees him again she’ll kill him. Even more ominous than Doc killing Charlie, was the twisted smile and laugh Tim Rozen delivers as he walks off, giving spine-chilling Joker vibes.

Kevin drops a bombshell that not only was Bulshar’s arm, not the weapon, it was the ring, which was Julian’s, who was one of the two Angels (other is Juan Carlo) who guarded the Garden of Eden, but Wynonna is not the chosen champion, Waverly is. We also learn that Bulshar, originally took the form of the snake in the garden that tempted Adam and Eve. The window to enter the garden (for Bulshar) or seal it (protecting it from Bulshar) occurs once every 120 years during an eclipse known as the Pledge Moon. Kevin reveals that Waverly can stop Bulshar by taking her rightful place on Julian’s throne, sealing the Garden. Unfortunately, this sacrifice would result in the loss of Waverly’s life, turning her to stone. Wynonna vehemently denies this as an option, Waves scared as well, causing Kevin to drive off in a huff. We also see Mercedes attacked, pulled out of her doorway by a mysterious hand, Dani Kind brilliantly screaming ‘not the face’ in response. Ending the episode is a heart dropping performance by the Earp Sisters, the tear-filled delivery by Melanie Scorfano and Dominique Provost-Chalkley personifying why Wynonna Earp deserves ALL of the Emmy Awards.

So much happened throughout this episode, so many phenomenal performances, with fantastic writing exalting it into the stratosphere. A million questions left whirling in my brain as we march forward towards the double episode finale – what was that sword Juan Carlo had back in 1887? What did Maeve mean by saying Jeremy wasn’t fully human? Is Doc too far gone to come back to the man he was? Have we seen the last of Kevin? Will Mama Earp find Julian and bring him back to Purgatory in time to help fight Bulshar, possibly saving his daughter from the sacrifice? Can Bobo be trusted? Is Robin a ticking time bomb from the seed he was force-fed by Bulshar? Can Wynonna get Peacemaker back or come up with another way to keep Bulshar out of the Garden? How will Wynonna react to learning Doc killed Charlie? Can Team Earp prevent Bulshar from entering and claiming Paradise, the Garden of Eden, or is an apocalypse on the horizon?

Join us Friday for a special, sure to be emotional roller coaster suspense filled back to back episode finale!