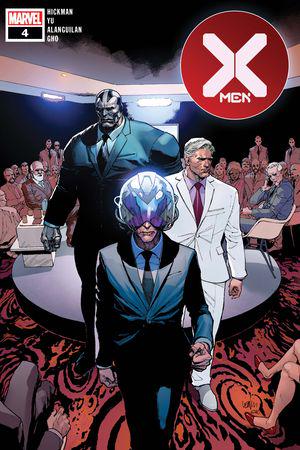 This issue is heavy on storytelling that will impact the future of this series. The government of Krakoa has been invited to a global summit to establish relations with the rest of the world. Charles Xavier has become one of the biggest power players on the planet, seemingly overnight, and now has to carve out the future of the mutant race on the world stage. No pressure right? What could possibly go wrong when you have Magneto and Apocalypse in tow to take on the global elite?

In what might be the most political and complex story that Hickman has offered readers thus far; which is saying a lot considering the number of new concepts and ideas that have been infused into the franchise over the last year. Charles and company confront the leaders of the world on their own terms. Speaking in the language of money and power, leaving no doubt that mutant-kind has changed tactics in relation to getting along with humanity.

Better versions of a better life. Better drugs for a longer, healthier existence.

And when we take the money- the outrageous sums of money you will give us because it also means more wealth for you- and we will invest it.

Then, when we have this influence- we will use it. We will make sure that the wrong sort of people—and you know who- no longer have any economic power.

These are ideas that far surpass the traditional X-Men dogma of the peaceful co-existence of mutants and humans. This is a mutant agenda that removes any choice. It’s the subtle and slow plan of world domination and coming from the lips of a radical mutant extremist like Magneto that has to be chilling to humanity. Mutants plan to fight a war without firing a single shot. This subversion of the world’s economic and political systems is far more insidious than anything attempted before in this title.

I personally believe that this is Hickman beginning to start the division of sides in the title. Mutants, up to this point, have flocked to Krakoa. But now the plans to keep paradise might be more costly than anyone could have imagined.

Humanity isn’t likely to roll over and play dead either. There is evidence of that in this issue, as Cyclops and Gorgon are tasked with taking out two strike teams that were staged to enter and eliminate the mutant delegates. All of this is building up as the stakes for the X-Men and mutant-kind get ever higher. Hickman is taking the struggles of a race and putting on the world stage in a way that fans have never seen before. A compelling narrative that is a must-read.

Marvel X-Men
Add your voice!Join the conversation on Discord...
Join Our Discord