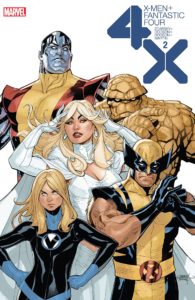 From where we left off, Franklin and Valeria Richards ran off to join the mutants. Stuck at sea, they found themselves actually rescued – rescued! – by Doctor Doom… uncle to the esteemed Richards children.

Reed and Sue blame the mutants for kidnapping their children, and end up starting a bit of a war with them.

However, Uncle Doom wants to help give Franklin back his powers, on one condition… which is certainly for evil, knowing him. 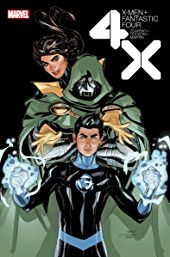 The art is still pretty great. Not too sleak, but sharp enough where you know who the characters are supposed to be. Valeria didn’t look as impish in this issue as she did in the last issue; she wasn’t as conniving so much as sarcastic in this issue.

It’s a good issue,  but I feel it lacked in story. The first issue had more story in it, and I felt something for the characters, but this issue felt flat to me. Not much dimension, and too many characters. The story may have been cohesive, but too many cooks spoil the pot, if you get my drift.