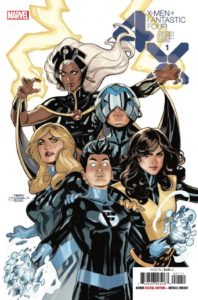 Wow. I’m a huge fan of the X-Men films (the early ones) and I admit I’m a fan of the original two Fantastic Four films (you know, when Chris Evans was the Human Torch, and NOT Captain America). I never thought there would be a time where the two groups are enemies. But that story had come and passed. Now… now I’m not so sure.

Reed Richards and Sue Storm had two children, one of whom was born with powers - powers that are dwindling, and cannot be rekindled. The X-Men and other mutants gathered from around the globe now occupy one singular spot, where all mutants can be among their own kind.

In comes Franklin Richards, the boy born with powers, now singled out by Professor Xavier. It should be no surprise as to why.

The boy’s a mutant.

What ensues is a bitter match of powers and words among the X-Men and the Fantastic Four, all over what they believed to be right for the quickly maturing young boy.

I. Freaking. Loved this.

I’m quite behind on my superhero stories, and it’s high time I flew back into the fray. And what a place to start! The art is very much of the modern era of sharp lines and gritty undertones, but they play well with the scenes in the story. Especially Franklin’s sister, Val Richards. A point of light-hearted relief in such a tense story, drawn as a coyly smiling young girl, with a much more colorful color palette as well. she almost reminds me of a playful imp, or fairy, there to cause some mischief, but not too much. Luckily her brother’s there to counteract her actions.

I’m already invested in this storyline, and it’s only issue one! I cannot wait for what the ensuing issues will bring!