You Are Obsolete #3 (Review) 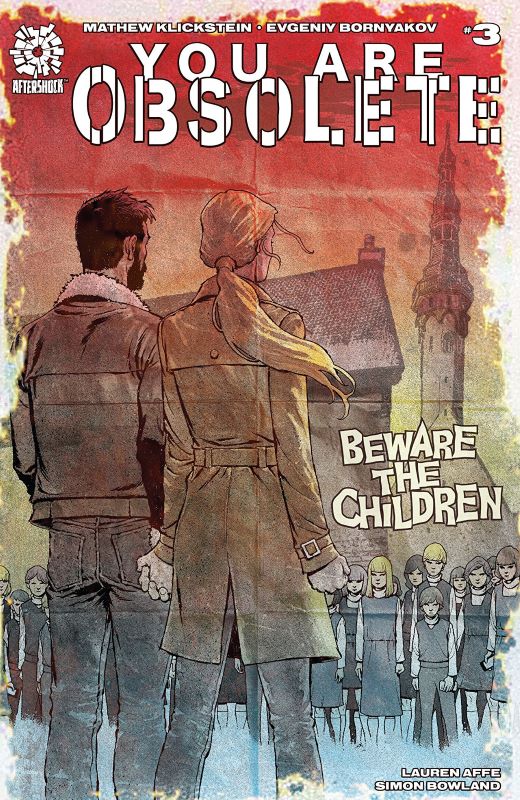 You Are Obsolete is an eclectic title that doesn’t fit neatly into any one genre or box. Upon beginning the issue there are no summaries or introductions to the series for new readers. (like myself) So you are going in blind. My first impression of this issue was Children of the Corn meets Village of the Damned as the story starts off with the youth of a town killing anyone over the age of forty. We follow the trials of our main character; a popular journalist, Lyla Wilton, who has been chosen by the local youth to tell the story of how they have taken over their town and soon the world. To combat the violence and madness around her, Lyla medicates herself through booze and pills, as she tries to rationalize adults being murdered and committing suicide around her; all at the hands of the children.

If this sounds like a bad Stephan King short story than you’re not too far off the mark, as the horror is cliche and when Klickstein does attempt to modernize the tale of youth overtaking the previous generation it comes off as poor social commentary. We’ve seen it done better in other media and the comic seems to drag at points as over-wrought dialogue weighs down the emotional impact. Klickstein is trying too hard to shock the reader with the actions of his characters, but the story lacks heart and therefore the emotional punches lack impact.

While there are nuggets of a good idea here; the children have developed a killer app that flatlines an adult’s brain, we are limited in the scope of the story by being forced to watch events unfold through the eyes of Lyla. Lyla is playing the role of the damsel in distress. For whatever reason, she is a willing voyeur to multiple deaths and would rather argue the moral implications with other cast members than trying to fight for her life. The comic gets bogged down in the moral arguments that Klickstein is trying to make instead of letting the action and drama speak for itself.

The real star of this comic is the artist. Evgeniy Bornyakov is a Russian artist that really stood out. In fact, I was caught off guard at how much I enjoyed the visuals. Evgeniy’s characters come with amazing facial expressions, fluid design and movement, solid backgrounds, and good pacing. You can tell by the page layouts and some of the poses that were chosen by the artist that this is a creator that is still early on in their craft, but someone with an enormous amount of potential. This is someone that comic fans should keep an eye on as I expect that Bornyakov will be making an impact within comics for years to come.

The rest of the art team did their jobs. The colors are muted and play into the drug-induced haze that Lyla walks around in. Don’t expect big flashing colors, this is a small-town horror story. It’s supposed to be winter and depressing. The tones fit the story.

While You Are Obsolete will have its audience, it’s hard not to feel that if the creators had just taken a little more time with this idea and concept they could have fleshed it out into something special. As it stands now the book is good, but not great. A solid effort that misses the mark.

Aftershock You Are Obsolete
Did you miss breaking news?We publish new content every day.