Picking up two years after the events of season two, ‘Young Justice: Outsiders’ starts with an increase in meta-human trafficking that splits the Justice League down the middle. Kaldur, the new Aquaman, attempts to keep the peace but Batman and multiple other members resign, and Batman pulls Robin, Arrowette, and Spoiler off The Team. Meanwhile, Dick Grayson assembles a stealth mission to Markovia with a team consisting of Black Lightning, Superboy, Tigress, but when they arrive things take a turn for the worse.

It was so easy to hop right back into the show without skipping a beat, like these past five and a half years never happened. The two-year time jump provided some interesting character developments, but it felt like something was missing the whole time.  Kaldur leading the League is a perfect role for him and makes for a great bridge between the two teams. Dick leaving The Team to lead the group that feels like it will become the Outsiders feels like the natural progression to his arc as well. Black Lightning/Jefferson Pierce quickly became my favorite new character, with his storyline being the most heartfelt and tragic. Khary Payton does an excellent job delineating his voice between Jeff and Kaldur.

READ THIS
Batman: Curse of the White Knight #8 (REVIEW)

These first three episodes focused a lot more on setting up the Outsiders instead of The Team. In fact, we didn’t even see The Team after the first five minutes of episode one. Connor’s personality is much lighter this season, his anger not as frontward facing as it used to be. It was about time he had this personality change after being dark and brooding for seven years. Artemis played a major role but they didn’t delve into her character much yet, but if her storyline is as good as the rest then I’m happy to wait. The meta-human trafficking plotline seems like an ingenious way of introducing tons of new characters to the show. Everything that happened in these first three episodes felt exactly as it should, and the story went on as if the show was never canceled, to begin with.

​’Young Justice: Outsiders’ has started a phenomenal new chapter in our favorite characters’ lives, one with powerful storylines and mature themes that exemplify the benefits of being on a streaming service. The six-year wait for this show was completely worth it.

READ THIS
Batman and the Outsiders #11 (REVIEW) 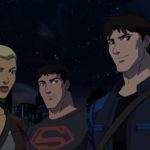