Zero Time Dilemma is the third game in the cult favorite Zero Escape series of visual novel / room escape video games developed by Spike Chunsoft and published in the US by Aksys Games.  The first game, Nine Hours • Nine Persons • Nine Doors (or 999 for short), was released exclusively on the Nintendo DS back in 2010.  The second game, Virtue’s Last Reward (shortened to VLR), was released on the Nintendo 3DS and Playstation Vita in 2012.  Each game revolves around a group of nine people who are trapped in a life or death game by a mysterious individual called Zero.  While the plots of all three games are connected, it is possible to play this newest entry as a stand-alone title. 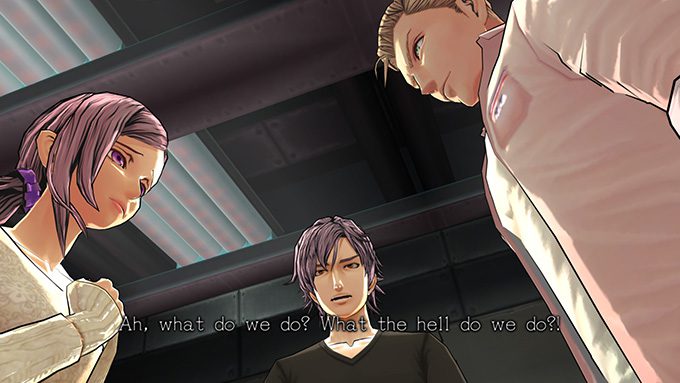 Akane, Junpei and Carlos must make a difficult choice.

The gameplay is broken up into two main modes; Story Mode and Escape Mode.  In Story Mode, you will watch fully-voiced cutscenes that set up each escape scenario as well as show the results of your actions during each escape segment.  Much like VLR, you can choose between English and Japanese voices and enable or disable subtitles.  The voice-acting in either language is top-notch, a vital thing considering how plot heavy this game is.  The second gameplay mode is Escape Mode, you will take a first-person view of the characters’ surroundings and be tasked with solving a series of puzzles in order to free the survivors of their prison.  Puzzles range in difficulty, but I never ran into a puzzle that seemed impossible.  Their are also a large variety of puzzles, so you are rarely doing the same thing twice.  New to this game are time-sensitive decisions you will need to make that will alter the fates of the various characters in far more drastic ways.  There is often no right answer, so you’ll frequently have to rely on your gut instinct and live with the consequences.  On the plus side, if you’re not happy with your result, you can always replay the scene and make a different choice.  A beautiful thing for all of you completionists out there.

The narratives of the first two games, while steeped in science fiction and the supernatural, were fairly linear experiences.  This game presents numerous chapters at once, allowing you to play them in whichever order you like.  At first, I was worried that this would make the plot feel disjointed, but the game’s story does a good job at justifying why the game offers this sort of jigsaw puzzle layout.  Playing particular scenarios in certain ways will unlock new chapters based on their outcome thus ensuring that there is always a fresh assortment of scenarios to choose from.  Replaying a chapter will also present you with the option to skip to a certain point as well as being able to fast-foward through cutscenes you have already viewed.  This makes unlocking branching story paths much easier because you can basically jump right to the point where the story branch occurs rather than having to fast-forward all the way from the beginning of the chapter each time. 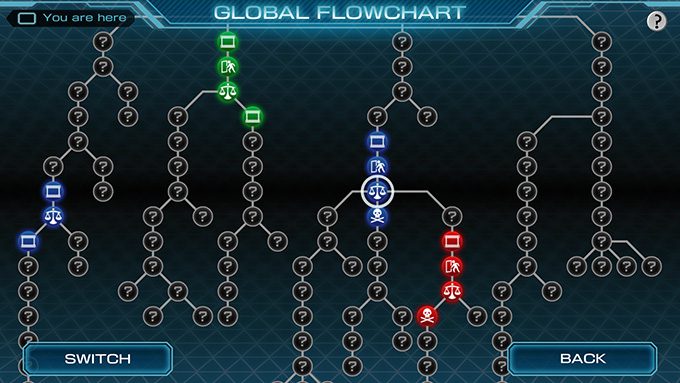 This is just a portion of the list of chapters and where they fit within the overall story.

As for the story, the events of the game take place one year after the end of 999 and merely one day before a terrible mass extinction event referenced in VLR occurs.  Nine people, including Junpei and Akane from 999 and Sigma and Phi from VLR, wake up to find themselves imprisoned by a masked figure calling themselves Zero.  The nine prisoners are separated into three teams of three that are locked away in three different wards of a mysterious, underground facility located in the middle of the Nevada desert.  They are being forced to take part in a series of games that will each culminate in a life-or-death decision that the player will need to make.  The only way to escape is to enter six keywords into a computer terminal connected to the facility’s only exit.  Unfortunately, a keyword will only be revealed when a participant dies, so only a maximum of three people will make it out of this twisted game alive.  Who dies, and how, will depend on the choices that you make.

The player can alternate between the three teams, taking on the role of the three team leaders.  Each of the team leaders are new characters, so they help to serve as your conduit into the Zero Escape world in case this is the first game in the series you’ve played.  Having control over all three team leaders gives you the ability to decide if the teams will try to work together or if they will plot each other’s demise for the sake of their own survival.  One of the overlying themes of the game is based on Hugh Everett’s “Many Worlds Interpretation”, so you will witness many different versions of the game’s events playing out at the same time.  Which world is the “real” one will be up to you to decide.  Throw in a clairvoyant, a couple of time travelers and an amnesic boy in a strange helmet and you’ve got yourself a sci-fi story unlike any other. 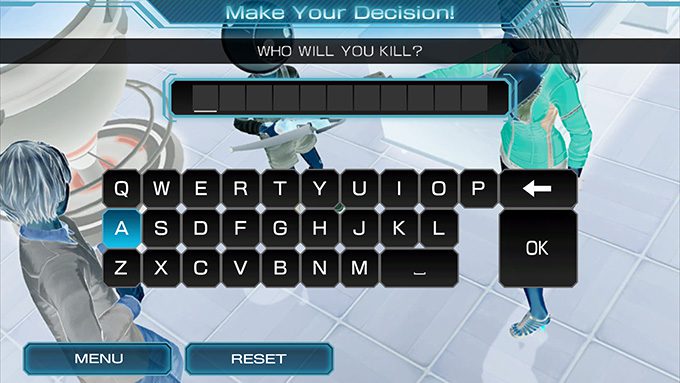 There is no right answer to many of the decisions you will be forced to make. Choose wisely.

Going in-depth with this game is tough as so much of what makes these games so good involves the intricately woven story.  What I can say is that the narrative is excellent and, while it has a heavy sci-fi element, the story never gets too “science-y”.  The time-sensitive decisions also keep you on your toes and help to enhance the tension and sense of danger.  Your choices will inevitably lead to the gruesome death of your team, but jumping back to change the decision that sealed their fate is quick and painless.  The only real complaint that I have is that the Nintendo 3DS version does not display in 3D.  As VLR was playable in 3D, this feature was sorely missed.  That aside, the touch screen is well implemented but also fully playable without it, in case you prefer a d-pad and buttons over a stylus.

Zero Time Dilemma will be released on June 28th for the Nintendo 3DS and Playstation Vita.  It will also be released on Windows PC, via Steam, on June 29th.  Anyone who pre-orders the game through Steam will also receive a 12-song mini soundtrack and a 48-page prequel comic / digital art book for free.