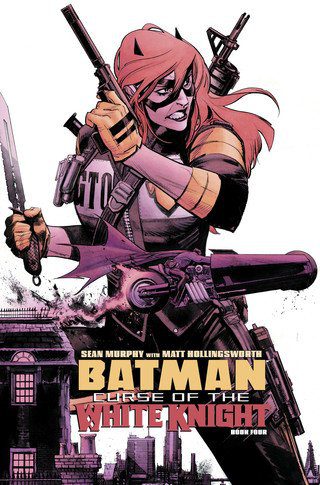 (WARNING: Spoilers ahead for Batman: Curse of the White Knight #4.)

This was an absolutely outstanding issue for Barbara Gordon — with the exception of the very end.

She dominated the cover. Sean Murphy’s gritty artwork allowed us to feel her pain deeply.

The introduction, juxtaposing young Batgirl and present-day Batgirl at the hospital. As much as we knew what happened to her dad, Jim Gordon, in Batman: Curse of the White Knight #3, it’s still easy to understand her pain.

Seeing Batgirl out for vengeance, while Batman continued to mourn, was another outstanding decision by Murphy. A perfect display of how much a parent’s words and encouragement can stay with a child. Azrael hit Batgirl hard and she was about to hit back harder.

But Batman just had to get in the way.

Not only that, Batman left Barbara hanging out to dry once he disarmed her. Azrael could’ve done much worse damage than he did. Now, it looks like he broke or dislocated Batgirl’s arm. If he broke her back, I don’t know how Barbara ever forgives Batman. Because that’s entirely on him.