‘Batman Ninja’ is the next DC Home Video Original Film 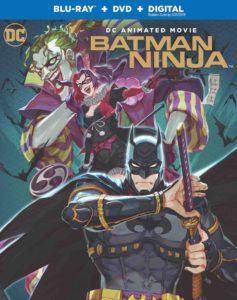 Now that Gotham by Gaslight is out on Home Video WB has turned their attention to the next film in the line of DC direct to home video original film’s: Batman Ninja.  The film will send Batman to feudal Japan via a time displacement at the hands of Gorilla Grodd.  Once in Japan the Caped Crusader must figure out how to defeat that time period’s version of the Joker, and find a way back to his time.  The film will feature eastern versions of many of Batman’s famous foes and allies, and will hit home VOD on April 24th 2018 with a physical media release scheduled for May 8th.

This film looks like a total blast, WB has even went as far as to add a dubbing element to the film to make it feel like you are watching one of your grandpa’s old samurai film’s on VHS.  The decision by DC to have Flash villain: Gorilla Grodd be the cause of Batman’s unwanted trip East is also a brilliant concept, as we rarely see the Dark Knight go up against any of the rogues.  All of Batman’s allies from Catwoman to Robin look very stunning in what is a very stylized take on the characters.

Let us know what you think about Batman Ninja in the comments below! Will you be adding it to your blu-ray collection?