After last month’s lack luster Powered Geek Box time has the power to fix everything. Time travel has long been a preferred genre of geek culture and Powered Geek Box is celebrating that in force with February’s offering. Let me just start off by saying if you didn’t order February’s box you’re going to wish time travel as possible, especially if your a Doctor Who fan. When the box first arrived I was immediately struck by its weight. This is by far the most packed and heavy box Powered has ever produced and once I popped the seal and would have never guessed in a million years what I found inside. February’s products are by far the most unique items I have ever received in a monthly subscription box, don’t expect your normal fare and hopefully you’ll be presently surprised. 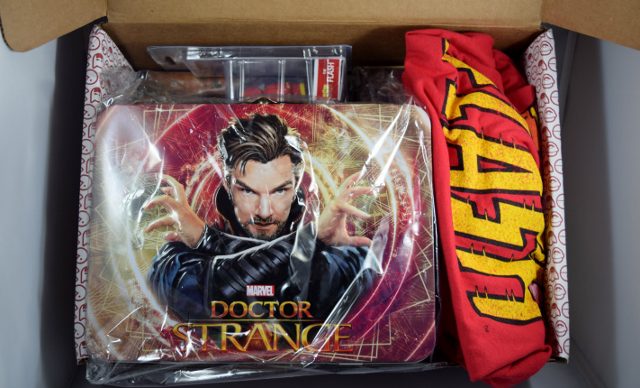 The largest item and my favorite by far was the Doctor Strange Lunch Box featuring Benedict Cumberbatch as the magical doctor from the recent Marvel movie. In the spirit of the film the tin lunch box is bright, colorful and features some great images of Marvel’s magician. The lunch box is metal, sturdy and will make a beautiful piece to any fan’s collection. I especially love the geometric designs pulled straight from the film and the bright, spacey purples that encompass its surface. Weather you add it to your collection or allow you little one to use it for is practical purposes you will be hard pressed to take your eye off this striking and unique product.

While the majority of the items in February’s box are not things you would normally receive in a sub box, it does still include a t-shirt. This month’s features our favorite time traveling DC Comics superhero, The Flash. Featuring his more classic look, every fan of The Flash TV show or comic will appreciate this simple, yet dynamic design. The Scarlet Speedster appears to be leaping off the fabric as he runs in his featured pose and the iconic The Flash title is emblazoned behind him on a bright red background.

Keeping on the Cosmic Treadmill, we are also given a The Flash Pin Mate Wooden Figure. This two inch wooden statue is extremely cute, simple, well crafted and the perfect figure for you office desk. The smiling Flash figure perfectly represents the whimsy and fun that has always been associated with the character and as his popularity grows, I see no better way to display your Flash fandom than to proudly present this simplistic figure for all to see.

Our last Flash item is a small button featuring the iconic logo with the white background. And even though there isn’t much to say about it, its yet another fun way to display your Flash fandom for all to see.

Personally my favorite super hero Doctor is Steven Strange, but another time traveling Doctor has a following that can only be described as die hard and massive. Doctor Who fans this box is for y you as the majority of its items feature BBC’s most popular series. The first Doctor Who item and the one that impressed me most was the 5oo Year Diary. This beautiful, replica features a brown textured cover and feels like it came right out of the show. But the really selling point happens when you open the clasp and start turning the pages and see the wonderfully weather pages given the true appearance of a 500 year old diary. If your a Whovian this is a must have item.

Another item straight from the Tardis will have Whovians playing out their favorite Doctor Who adventures via the Doctor Who Top Trumps Card Game. As I’ve mentioned before in these reviews I am not a Doctor Who fan even in the slightest, but I can appreciate when a sub box provides fans with products that celebrates them and their fandom. The Doctor Who Top Trumps set gives Whovians hours of fun featuring Doctor Who trivia. The game features 30 cards all with varying characters, stats, and trivia another great item for your Whovian household and the perfect party game for your Doctor Who premiere party.

Our last item is another Doctor Who card game and the most involved product featured this month. The Doctor Who Alien Attack Card Game starter pack includes a pack of cards, featured card, binder and protective sheets, checklist and game board. Now while I admittedly don’t under any of this stuff or how it works, I could only image my excitement if I loved Doctor Who. I mean there is a lot going on here and even though its just a starter pack it would be hard to deny the value to a household of Whovians. I apologize for the lack of detailed images for this product set but I know a Doctor Who fan who would absolutely cherish this game and thus want to leave it in tact for them. But I can assure you its inclusion is impressive and looks like a ton of fun.

Even though January’s Powered Geek Box was a disappointment, February’s makes up for it in strides. I am extremely happy with all of the products presented in this box, even though Doctor Who is not a fandom I follow, I can appreciate everything this box’s has to offer. The Flash items and Dr. Strange lunch box are more than enough to satisfy my geek hunger and the Doctor Who items just become icing on the cake, at least I know my Whovian friend will be very happy when I send them these time traveling trinkets. 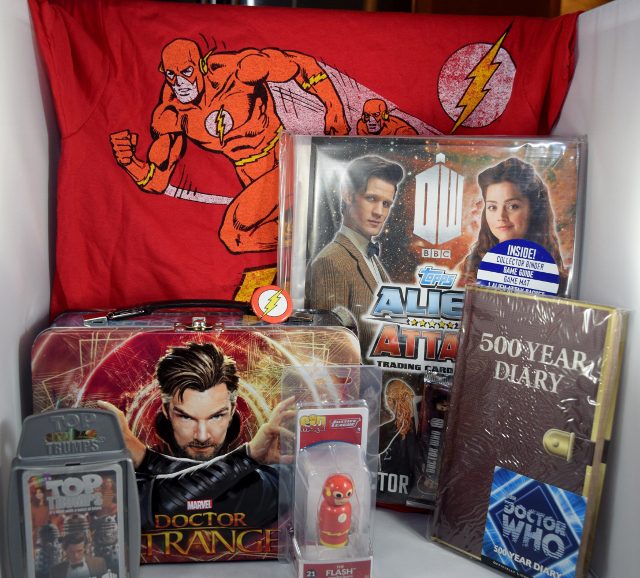