Got to be starting something in Superman #18 (Review) 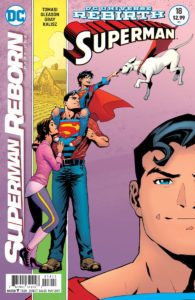 Peter J. Tomasi and Patrick Gleason run on Superman has balanced small personal stories with grand multiverse tales. Tomasi and Gleason started with a few father and son stories between Clark and Jon. They then penned stand alone issues where Jon had a chance to shine as superboy and has led to the Super Sons series. The past few issues found DC’s Rebirth Superman teamed up with Supermen from across the multiverse to stop an unknown threat. At first, this villain appeared to be a way to bring multiple versions of the character together. Serious characters like Grant Morrison’s President Superman of Earth 23, Calvin Ellis, had a role, along side characters like Captain Carrot. All of this seemed to be fan service until the end of last issue. In Superman #18, the personal and the mulitverse come crashing together.

Issue 18 starts ominously. The character that collected Doomsday back in the first post-Rebirth arc of Action Comics also has collected Tim Drake from the pages of Detective Comics. The multiverse villain from issues #16 and #17 is part of this same mysterious collection. The mystery around a 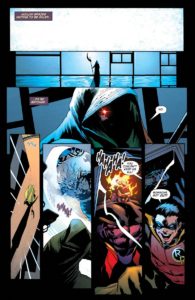 powerless Clark Kent, which has occupied a number of issues of Action Comics appears to be connected to this same collector.

The main action of this issue occurs in moments, but Patrick Gleason draws it in a way that sustains the emotion and tension over pages. Gleason returns to artistic duties after a few story arcs and his return ties the tone and theme of this new story arc back to the start of DC’s Rebirth Superman. Gleason’s art surrounding the Kent family is often more rounded and cartoony, but it portrays an “aw shucks” caring of the family. This easy natured art style is juxtaposed well with the threat to the family that Tomasi and Gleason have crafted.

Whoever this mysterious collector is and whatever the powerless Clark Kent is looks to be a compelling storyline across both Superman books. The challenge with a strong opening chapter is being able to deliver over the course of the arc. Fortunately, the consistent writing in both Superman and Action Comics suggests that these creative teams are starting something good.

Tomasi and Gleason’s run on Superman has balanced the man with the multiverse. Issue #18 creates a great lead into a Superman crossover that has the potential to answer a number of questions both for Superman fans and for fans of DC’s Rebirth. While answers about who the mysterious figures are still linger, words like “watched” are used to provide either clues or red herrings. Answers or not, Tomasi and Gleason provide readers an emotional start to this new story arc. Readers should be thankful the story continues in Action Comics #975 next week.