Editor’s note: We were sent review codes for both of these games. The reason we are combining the reviews is to give you the reader a more informed view as to whether you might want to get one game over the other or possibly even both. You can even see our review for Jackbox Party Pack 3 right here. Thanks!

Over the last two decades, we’ve seen the steady growth of online multiplayer games as it exponentially hurls towards recent developments like e-sports and live streaming. In comparison, there are very few games that make the core of their experience about couch co-op play.

While games with local multiplayer has fallen by the wayside, the “party game” scene has become more of a unicorn. BUT with Jackbox Party Pack, developed by Jackbox Games (formerly Jellyvision), you’re given an experience that is not only couch co-op but can also be played by as many as eight people at once.

Most people will recognize Jackbox for their You Don’t Know Jack series, but they have definitely expanded the scope and variety of their games - the Jackbox Party Pack being a prime example of this.

While having eight people playing one game sounds like an impossible experience to accomplish, this is made way easier by having the game be played on people’s phones/tablets/pc’s as opposed to a game controller (just one controller is needed).

What is in the Jackbox Party Pack 1?

With a package having the price tag of $25, the packages themselves are an easily recommended value, offering five games for about $5-a-piece. There’s the always familiar You Don’t Know Jack expansion for 2015, an deluxe version of Fibbage with over 50% more questions added to the original game, another find-the-lie-focused game called Lie Swatter, a goofy word association game called Word Spud, and a clever drawing game called Drawful.

Hits and Misses for Party Pack 1

Fibbage is a title I found to be popular amongst my friends. It does a great job in creating laughs while still offering a competitive experience. Basically, players attempt to create convincing lies to a given question while also trying to figure out the truth. Not only will picking the correct answer give players points, they can earn themselves even more points by deceiving other players into believing that their lie is the truth. 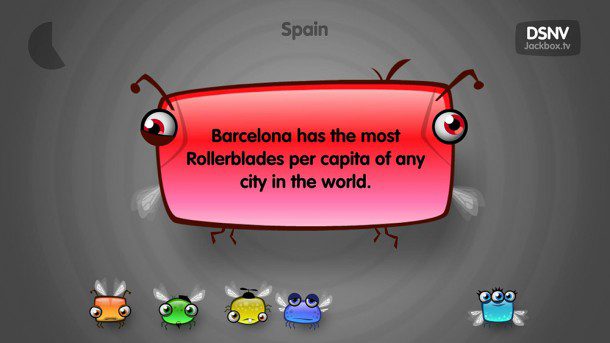 Lie Swatter is impressive in that it can support up to 100 players, and it plays out as a simple true or false guessing game. I really like this game, as sometimes you need a game that is simple to follow along. I can see this being a polarizing game, in that it may be too simple for some, but the larger a game’s pool of participants, the larger the necessity is for simplicity.

Word Spud might be the my least favorite game. Although it offers some laughs, its overall entertainment doesn’t last long. It plays out as a word association game and therefore not necessarily a competitive experience. Really, it’s designed for players to create phrases to make each other laugh, but doesn’t extend much beyond that.

The surprise delight in this package turned out to be Drawful, a silly game where players try to represent words or phrases with pictures. With players using the touch screens of a phone, these images rarely come out as perfect and that’s part of the magic of the game. Because sometimes a garbage truck on fire is still entertaining, right? 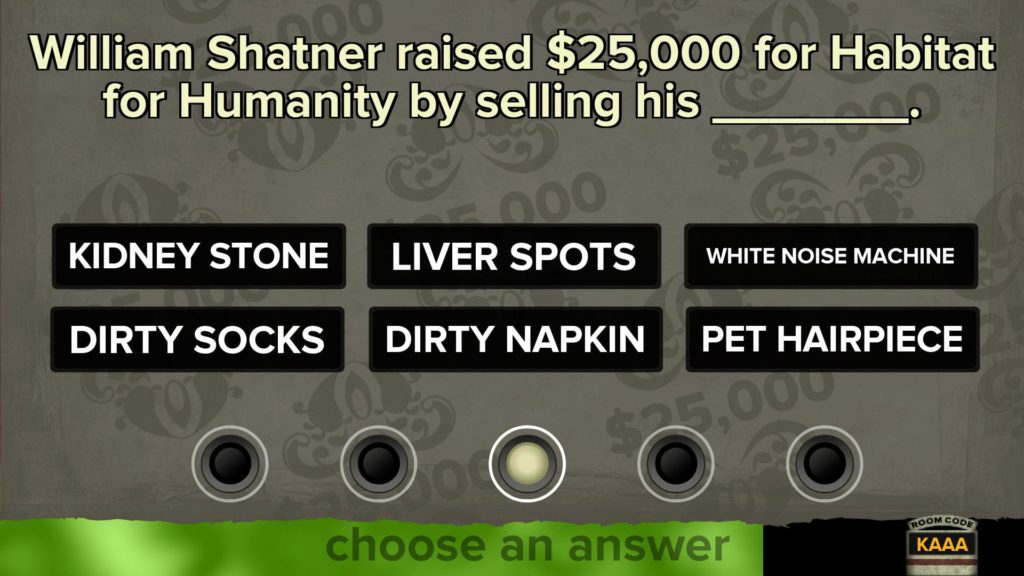 One final addition that puts it over the top for me is that after each drawing is shown, players then try to create fake answers almost like Fibbage. So while you’re trying to figure out what the image represents, you’re also creating a convincing answer for your opponents.

What is in the Jackbox Party Pack 2?

Like its predecessor, The Jackbox Party Pack 2 includes five games in the collection, two of which are follow-ups to previously mentioned games.  Fibbage returns with Fibbage 2, Earwax is a sound effects-focused game, Bidiots has you outdraw your opponents, Quiplash has you fill in the punchline to make the biggest gut-busting laughs, and Bomb Corp. has you and your team working together to disarm bombs.

Hits and Misses for Party Pack 2

Fibbage 2 keeps the same great format of creating believable (or hilarious) lying answers to trivia questions to bamboozle your friends while adding in a few new tricks. For example, the new one-time use “deFIBrilllator” gives you a 50/50 chance between the right answer and a single lie instead of seven. Thankfully, unfortunate repetition no longer rears its head as the number of questions have more than doubled than that of the original.

While Fibbage 2 still supports 2-8 players, it brings back the audience feature of Quiplash to allow audience members watching on a stream or through the web based game client to participate in voting in their own favorite answers, giving even more points to the most hilariously cruel players. This feature is particularly great for streamers and those next-level individuals with large social media circles. Or maybe you can cram one-hundred people into your living room. Who am I to judge? 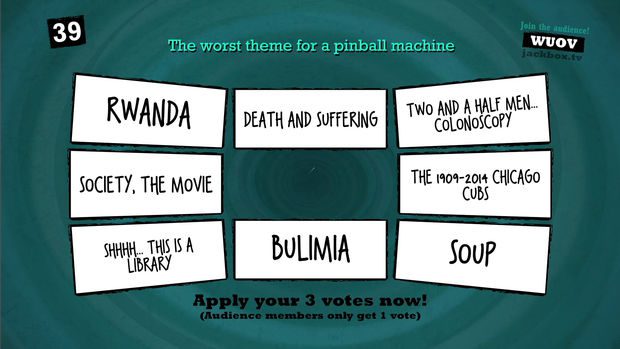 Quiplash, originally released outside the Party Pack as a stand-alone title, returns as Quiplash XL. It’s identical to the original, but includes the DLC question pack and an extra 100 prompts to spice things up after running into repeated questions. Quiplash is by far the loosest premise of the games, simply setting up jokes and asking the players to fill in a punchline. In the vain of games like Apples to Apples or Card Against Humanity, you and your fellow party friends then decide who had the funniest answer.

With Bomb Corp., you and your friends are interns at Bomb Corp. where you will need to work together to keep bombs from exploding. Each player receives different instructions on their phones and needs to share information to complete the task correctly. If not, you’ll get a bad performance review. Also, you’ll blow up and die.

The flat note of this pack is certainly Earwax. You’re given a statement and you have to finish that statement with a sound effect that is listed within a multiple choice list of answer that are different from the other players in your group. The issue I ran into all too often was that the answers were never that funny. Part of what makes a party game great is that everybody who is playing it gets something out of it. Too often did my friends feel like they weren’t really amused by the sounds they had to choose from. 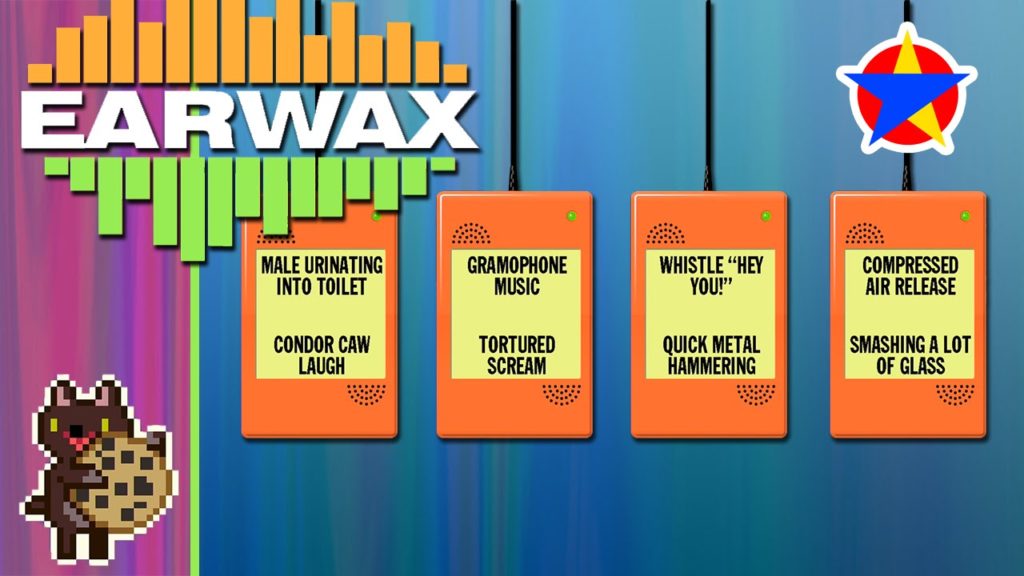 Which of these is the better purchase?

I’ll be completely honest. Both of these collections are a lot of fun. I can’t communicate enough that my friends and I got a ton of laughs and good times out of them. But when you consider that Jackbox Party Pack 2 features improved versions of its predecessor’s games, it feels like the superior purchase.

What is the SWITCH difference?

These collections are available on pretty much every current gen console and PC. But the Switch’s mobility really presents a compelling additional feature. Being able to set the Switch up in tabletop mode in any location with wi-fi access and play against your fellow friends make for a great experience.