Every filmmaker has a defining film of their career. For Kevin Smith, that film has always been Clerks. That was the first film he made, and self-financed, that launched his career as a Hollywood Director turned podcaster. But his true legacy lies in Jay and Silent Bob Reboot which is the Avengers: Endgame of the “View Askewniverse” he started in 1994. The film is now available on Blu-ray and Digital.

At first glance the film plays exactly as it’s sold: A tongue-in-cheek remake of 2001’s Jay and Silent Bob Strike Back. It is a sequel, a reboot, and a remake, while making fun of all 3 at the same time. But as the film progresses it evolves from a familiar stoner buddy road trip, to a really sweet narrative about family, fatherhood, and legacy.

The film shows the evolution of Smith. Smith felt like he was done with the View Askewniverse in 2006 with Clerks II. After that he ventured into the weird and niche, with films such as Tusk and Yoga Hosers. But an urge to play with his old toys again made Reboot happen. It is a sweet, nostalgic look back at his own career, and a reflection of his life now.

The jokes contained in Reboot are some of Smith’s best. There are a handful of jokes that perfectly peg the pop culture lexicon of today. Even the jokes meant to harken back to Strike Back work extremely well too.

Jason Mewes, who has portrayed Jay alongside Smith’s Silent Bob in every movie, churns out a career best performance. He gives more emotional depth to Jay than he has ever had before. The A-list cameos are a plenty, and due to the brisk pace of the “road trip” film, you get a new cameo about every two or three minutes.

While the film moves fast, it does lag a little in the second act. The first act is spent trying to acclimate the audience back into this word. The second act is where the film finds its emotional center, but it does so in a bit of a messy way. The third act is where that emotional center pays off. Mewes and Harley Quinn Smith, Kevin Smith’s daughter who is a talented actor in her own right, really have a lot to chew on. But it is the best cameo in the movie that adds to the emotional core of the film in such a surprising way. So surprising in fact, that you might even find yourself shedding a tear.

Jay and Silent Bob Reboot sequelizes every View Askewniverse film to date. The connections to Strike Back are obvious, but there is a beautiful Clerks shout out, a Mallrats character that fuels the plot, and a mini-sequel to Chasing Amy that ties the entire film together. There is even quite a pun-tastic Dogma sequence that serves as a perfect segue into the next part of the film.

The metaness of Reboot might be a bit much for people, as Smith appears in the movie as Silent Bob and as himself. There are a lot of great jokes at the expense of himself because of that, but sometimes it can seem like it is a bit much.

The callbacks work. The jokes work. The emotional arcs work. So the stuff that doesn’t is forgivable. Reboot is a wonderful addition to the shared universe that Smith built, and could absolutely end here. While Smith has more chapters planned (in the form of Clerks and Mallrat sequels), Reboot will age well and be something truly special. This is his legacy put on screen. This is whole career summed up in one story. This is his thank you to Mewes being sober, his love of being a father, and his appreciation to surviving a massive widow-maker heart attack. Smith has evolved as filmmaker and a person, and Reboot is all the better for it.

You can now own Jay and Silent Bob Reboot digitally, on blu-ray, or DVD. 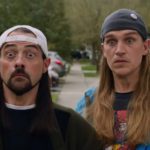 This BLACK WIDOW Theory is NUTS! (And ...