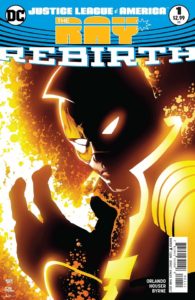 DC’s creative team behind the Justice League of America: Rebirth series is doing something amazing with the cast of characters for the new team. Each week in January, Steve Orlando and the creative teams have published stories that connect readers to these characters. The creative teams are helping readers care about these heroes on an emotional and personal level. The Atom launched with a brilliant scientific character that could have easily been portrayed as socially quiet, but Orlando showed Ryan Choi gaining friends and becoming more socially engaged as his confidence grew. Last week Orlando and Julie Houser crafted a powerful narrative in Vixen that serves as both a heroic awakening and a call to stand up and not passively accept the state of the world. This week Orlando again delivers a meaningful tale of Ray Terrill accepting who he is and not hiding anymore.

Have you seen this:
Diamond Select Poison Ivy Statue (Review)

Ray Terrill is a boy who has been living in the shadows, literally and figuratively. Ray’s powers are stimulated by light and his mother has 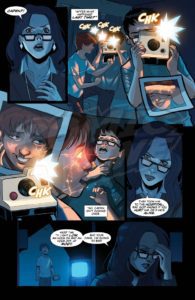 kept him in the dark during his childhood, both afraid of what the outside world would do to him and what he could do to the outside world. This narrative framing also serves as a metaphor for Ray’s sexual orientation. How often does society encourage people to stay out of sight “their own good.” Orlando’s script never gets heavy handed, but it is consistently poignant. Ray’s mother is portrayed not as an oppressor, but as someone struggling with the concern and burden of raising a super powered child. In one panel, she says, “Do you not understand you’ll die outside.” The double meaning is clear as there are many readers who have struggled for their own emotional or physical safety when they let the world see who they really are.

Ray experiences life as an observer and unseen. Ultimately, he decides that he cannot sit passively by and stands up for what he believes is right. This issue serves as a coming of age story for a young hero. Ray Terrill is a hero for using the super powers he was given. Ray Terrill is a hero for stepping into the light and believing that he is worth being seen. Ray Terrill, like Vixen before him, finds himself understanding that there are issues in life worth standing up and fighting for.

The Ray is moving and empowering without being preachy. Ray Terrill’s journey to super hero reflects the struggles many readers may feel living in shadows of their own. Orlando is creating an emotionally rich cast of characters for the JLA that look to shine light onto the world.