Thanks to Razer for providing GWW with this Huntsman Elite keyboard.

The first Razer keyboard that I ever owned was the Blackwidow Ultimate. I cannot remember when I purchased it but I’d fallen in love with the tactile, clicky nature of mechanical keyboards. It served as my main board at home while I adopted an equally impressive Blackwidow Lite for my office board a little under a year ago. The “silent” orange keys were an improvement sound-wise over my Blackwidow Ultimate’s Cherry MX Blues, but coworkers still complain about the clacking sound exuding from my office when I’m hammering out emails.

Right out of the box you can tell that the Huntsman Elite is a premium product – which is good, because it’s $200 price tag is whiplash-inducing to say the least. The board is heavy – 3.76 lbs. with the included wrist rest! – and it feels serious. While much of the chassis is thick plastic, the aluminum matte top plate is a very welcome addition. Cool to the touch and seemingly impervious to fingerprints, it’s the complete opposite experience that I’ve had with many other keyboards (including my Blackwidow Ultimate). This is a full-sized board featuring a 10-key pad right below four media buttons. There are no dedicated macro keys, but you can use Razer’s Synapse 3 software to put the keyboard in Hypershift mode – which then enables you to customize the keys on the board to your heart’s content. 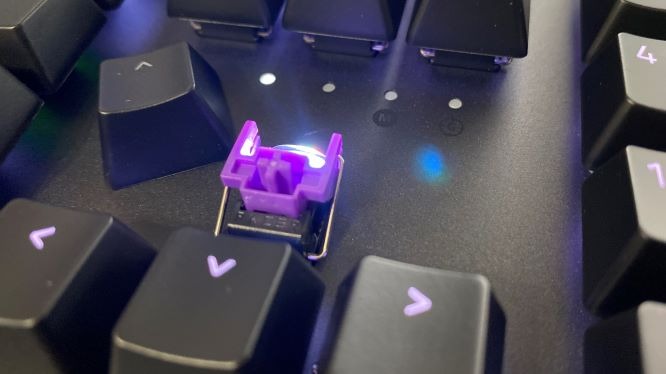 Perhaps the most important aspect of the Huntsman Elite are the new switches. Featuring Razer’s Optical Switches, the Huntsman keyboards are being heralded by Razer to be the “next stage of keyboard evolution.” Each key contains an optical light sensor which – upon your press – allows a receiver to be activated by a light signal, “instantly actuating the switch command.” While I cannot measure just how much quicker these keystrokes are compared to any of my other keyboards, I can say that the keys are my favorite keys to type on. Full stop. The board that I was sent for review contains the purple (“light and clicky”) variant, but there’s also a red (“light and instant”) option as well. When comparing them to the Blackwidow Lite’s orange switches, Razer’s purple Optical Switches feel much lighter and much more clicky. The older Blackwidow Ultimate’s keys feel almost mushy in comparison – when they used to feel the exact opposite to me. Additionally, you can tell exactly when a keystroke is registering with these purple switches if you press slow enough. Obviously, slow keystrokes are not why you’re looking at this board, and I can confidently say that I believe that the Huntsman Elite’s purple Optical Switches have improved my WPM.

While I’m typing at the speed of light, the very luxurious (and heavy) wrist rest gently cradles the palms of my hands. Honestly, I’m very concerned about how long this plush feeling will last because of how soft the wrist rest is! That concern, however, should be alleviated by just how well everything else seems to have been built. The wrist rest even plugs in to the Huntsman Elite and features base lighting through Razer Chroma – just like the board. It’s a nice touch that really brings the whole package together on when it’s on your desk. 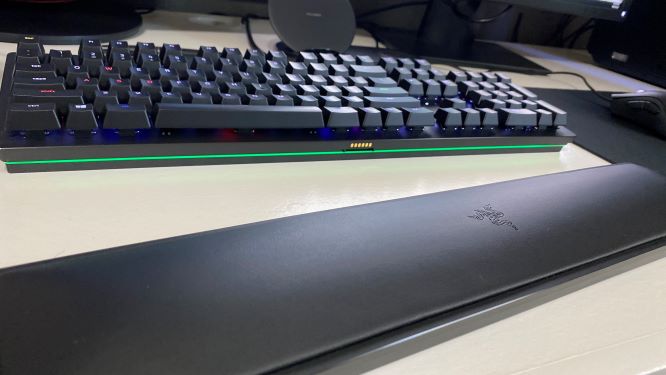 Speaking of Razer Chroma, each key is individually lit so for optimum customization. I personally prefer white backlit keys with accented “important” keys: W,A, S, D, left Shift, and Space are all lit in red; both Alts are blue; Esc is yellow; Enter is green; and the function key is magenta. I use Razer’s Underglow (the lighting around the lower portion of the board and wrist rest) to create a green glow on my white desk. Realistically, this has no bearing on performance and is purely aesthetic, but damn do I enjoy it. It also gets lots of comments whenever people come into my office.

Of course, there are also drawbacks to the Razer Huntsman Elite. First of all, the price is quite a hurdle for most consumers out there… think about just how much you could improve your PC by spending just $50 on a decent mechanical keyboard and injecting the other $150 elsewhere. Hell, the Razer Blackwidow Lite is a great board for only $90. The Blackwidow Tournament Edition is another fantastic board and retails for $140 or lower. If you needed a full-sized board, you could elect to go with the basic Huntsman for $150 (although it’s on sale for $99 on Razer.com as of writing this review!). It’s also important to point out that I’ve only listed Razer’s lineup… there are other quite competent boards out there from other manufacturers for less than $200. However, if you can afford it, the Huntsman Elite is sure to please.

The Less Than Ideal

Two places where I am less than pleased are in the areas of the media keys and the chunky cable. The media keys are… well… they just feel out of place because of how cheap they feel in comparison to every other key on the board. They work flawlessly when I’ve put them to use, but they look out of place on a board that looks much better from every other angle. Additionally, for some strange reason, while the bases of the media keys are lit, the actual functions are mostly invisible. Sure, you can learn quickly that there are Play/Pause, Skip, and a mute/volume dial… but the first three become indistinguishable even in light areas. One positive aspect of the volume dial – which Razer is referring to as a “Multi-Function Digital Dial” is that it can be reprogramed to do other things should you like it to. I must admit, I don’t mind having a dedicated volume wheel close to my mousepad… 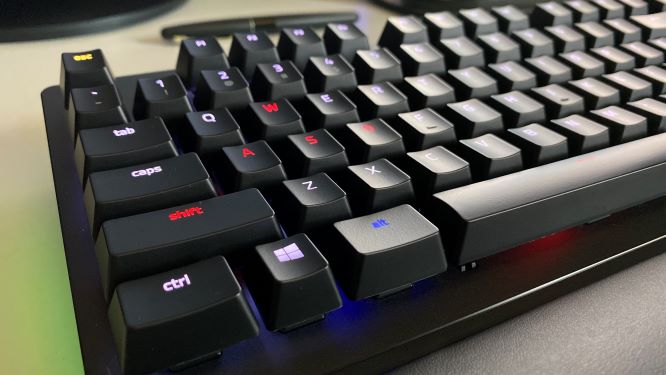 It may seem nit-picky, but I’m also a little disappointed in the cable… I don’t take issue with cabled devices – on the contrary I tend to gravitate towards them. But the chunky, stiff cable protruding from the back of the Huntsman Elite is cumbersome. It catches on things it passes whenever I shift my board from my gaming position to my typing position. It’s a minor complaint, but after handling the silky-smooth awesomeness that is the cable featured on the Razer Deathadder V2… I am a little spoiled and wish that Razer would utilize that weaving on other cables they manufacture.

Razer has outdone themselves with the Huntsman Elite. It’s the best and most luxurious keyboard that they manufacture. Whether or not it’s worth every penny will come down to your desire and use case. You’re spending an additional $50 for the Multi-Function Digital Dial with media keys, Chroma Underglow, and the “Plush Leatherette” wrist rest. If you can swing it, the Huntsman Elite will serve you well and turn heads at the same time. I’ve certainly enjoyed my time with the board. It’s safe to say that Razer has earned my keyboard loyalty yet again.

Have you seen this:
Razer Pro Click Mouse vs. Logitech MX Master 3