Doom at 60FPS in 2K on Ultra settings. That was my last 20 minutes.

Doom is the new Crysis as it relates to benchmarking action games. In 2017, if your laptop can run Doom on Ultra at it’s native resolution, then it can run anything. I took that to the next level and tested Doom’s performance on the Legion Y920, Lenovo’s flagship gaming laptop, on an external monitor in 1440p. The results were nothing short of jaw dropping. In a similar vein, the Y920 is a lot like the Doom reboot. It’s big, powerful and something I didn’t see coming. Also, I keep coming back to it. These past 2 months, I’ve had more review gear than I’m accustomed to: gaming laptops, ultrabooks, and traditional laptops. The Y920 was a true standout in that pack of gear. In the 6 years I’ve been reviewing hardware, I’ve never felt a laptop quite as purpose built as the Legion Y920. This is going to come up often: it’s big. It’s a big, heavy, bulky laptop that doesn’t even feature the top-of-the-line GPU from NVIDIA. It has thick, old-school bezels around just a 1080p display. On paper, and even in pictures, the Y920 looks like it shouldn’t be a contender for your desktop-replacement dollars. But with excellent engineering and some extra heft, it’s one of my favorite laptops of 2017.

The Y920 sets itself from the mid-level class of gaming laptops with overclockable GPU and CPU; the NVIDIA GTX 1070 GPU and Intel Core i7-7820HK, respectively. As well as a turbo button to make it easy for you. There is one other trick up it’s chassis: a 17.3″ NVIDIA G-Sync display. While it’s tuned to just 1080p, the G-Sync technology gives your games a few extra frames while blocking any screen tearing that would otherwise occur. To me, the reason you’d purchase the Y920 is for performance, purely. I’ll add that it is good desk eye-candy as well. The chassis is a very solid brushed aluminum that is much less likely to attract fingerprints than most gaming laptops, such as the Razer Blade or Legion Y720. When you open the lid you’ll find a short-travel mechanical keyboard with keys that can light-up individually alongside a turbo button that is set to overclock the GPU and CPU for a few extra frames while you game. There’s also a leathery palm rest below the keyboard that is comfortable and quite different from other laptops I’ve used. Put all of this together, with a plethora of I/O options, and you have an excellent flagship gaming laptop from Lenovo that shows they’re listening to their customers.

If there is any reason to hesitate on the Y920, it’s that it weighs 10 pounds without a GTX 1080 and still carries an MSRP of $2600. Keep reading and you’ll learn why Lenovo made this design decision. Regarding the price, Lenovo has a track record of discounting their products directly on their website and at retail. As of writing, the Y920 model I’m reviewing is discounted by $540. At $2100, this Y920 is an excellent desktop replacement.

The Y920 is one of those laptops that cannot be well represented in any form of media. When you experience it first-hand, with actual tactile contact, you’ll feel the value. It’s a substantial device. Yes, it’s big, Yes, it’s heavy. And, most importantly, yes, it’s a performance powerhouse. When you carry it around, it feels substantial, and the fingerprint resistant aluminum chassis feels like it should be bulletproof. You will absolutely feel like you’re lugging around a laptop that can replace your gaming desktop. For the past 30 days, every time I opened it up and began typing on it’s mechanical keyboard, I was transported to simpler times in my life when I had nothing but time on my hands and would game every night with my friends. Except this time I have backlit keys! In fact, each key is programmable to reflect an array 16.8 million colors, and clusters of keys can be programmed as well.

The typing experience is fantastic and satisfying, even without the lighting in place. I’ve seen users create elaborate lighting effects, but I’m more of a single color back-lighting kind of guy. There are really two reasons the keyboard feels as great as it does: the responsive and clicky nature of the mechanical keyboard and the palm rests. Lenovo elevated the rests just enough to give your wrists a more ergonomically friendly posture while typing, and the faux leather material is super comfortable. The trackpad also lights up around the border. Another neat effect is the lighting between the keyboard and the speakers. All of these are programmable.

The speakers are thunderous and can get loud while still being clear. I’m not an audiophile but I can tell you the Y920 clearly has some of the best speakers I’ve used on a laptop, ever.

The 17.3″ G-Sync display is sharp with excellent color representation, after some moderate tuning. The G-Sync tech is helpful to ensure you can squeeze out more frames and smoother overall gameplay from the GTX 1070 GPU. It’s worth the extra money since you can’t replace the GPU. It adds more life to the future of the Y920, and we’re starting to see more laptops equipped with it. The display is thick and backed by an aluminum lid that has a strong hinge that takes some effort to open. That’s not a bad thing – it’s actually pretty cool. On the bottom you have the same aluminum chassis along with a series of vents for cooling. 13 screws separate you from accessing several components; notably the RAM, SSD and HDD. This doesn’t make the Y920 easy to repair but certainly the ability to replace multiple components on a desktop replacement is something I can see many customers celebrating. The storage options include two M.2 PCIe NVMe SSD slots and the old standard 2.5″ SSD drive bay. This unit came equipped with a single 500GB Samsung SM961 NVMe and a 1TB Western Digital HDD, which I use to store my games and media files.

We have to talk about the turbo button. It’s rad. With a push of the button you instantly overclock the CPU and GPU. It doesn’t give you a crazy boost, but it’s enough to flick the switch and feel cool at the same time. Everyone knows I’m a button snob; particularly power buttons. I’m extending this description of myself to be a bit more broad now that I’ve used the Y920: any button on a device that is related to performance. So ya, the turbo button. It should have been a toggle instead of a slider. Instead of pushing it forward and having it slide right back, I would prefer it stayed in the on position. I’d like to feel it click into turbo mode and visibly observe that it’s in that state. Small complaint for most people but if you’re going to create a turbo button, I want to feel like I’m shifting gears in a Porsche.

Battery life is what you’d expect from a 10 pound gaming laptop. You’d have to be crazy to think you’ll get more than 2 hours of real life use out of the Y920. Maybe that’s unfair. I’m sure someone can tinker enough with the settings to find a way to get an extra 30 to 45 minutes out of it but this is a gaming laptop. Keep your power brick handy. 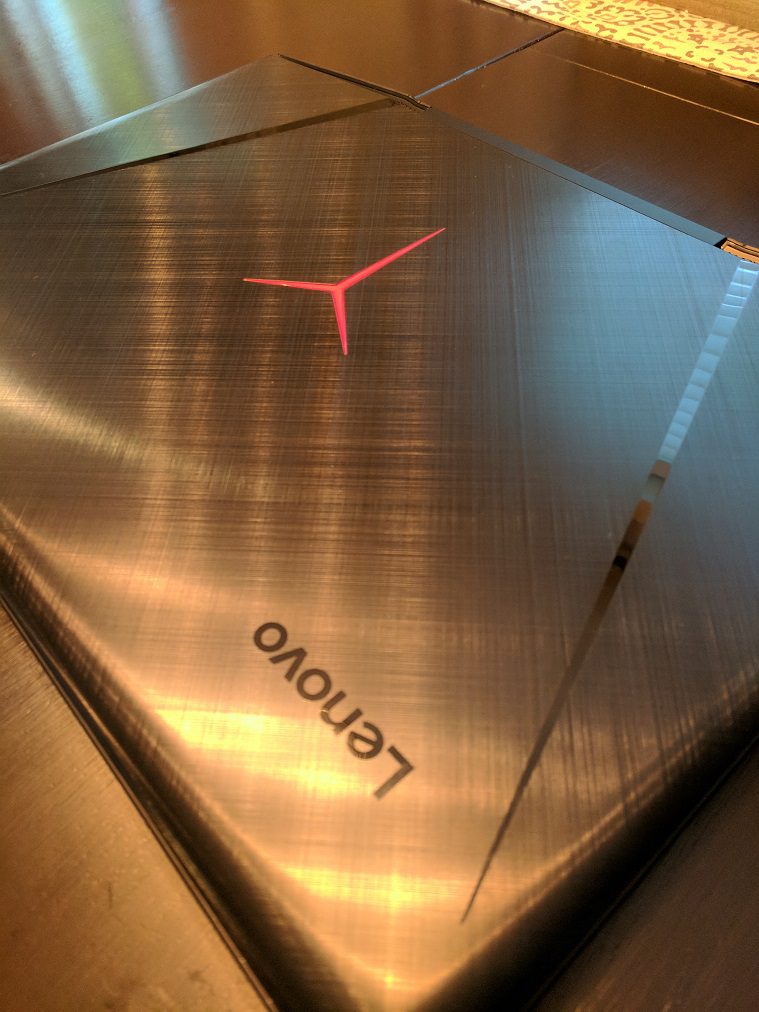 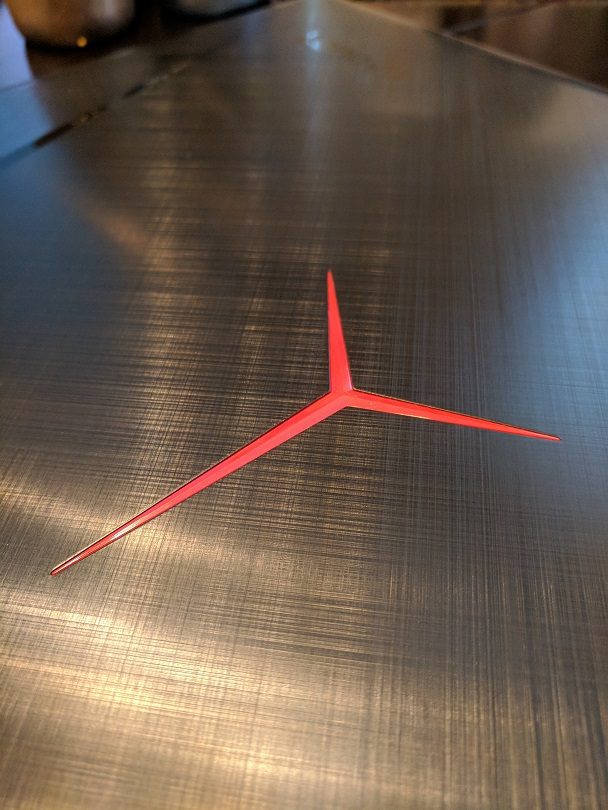 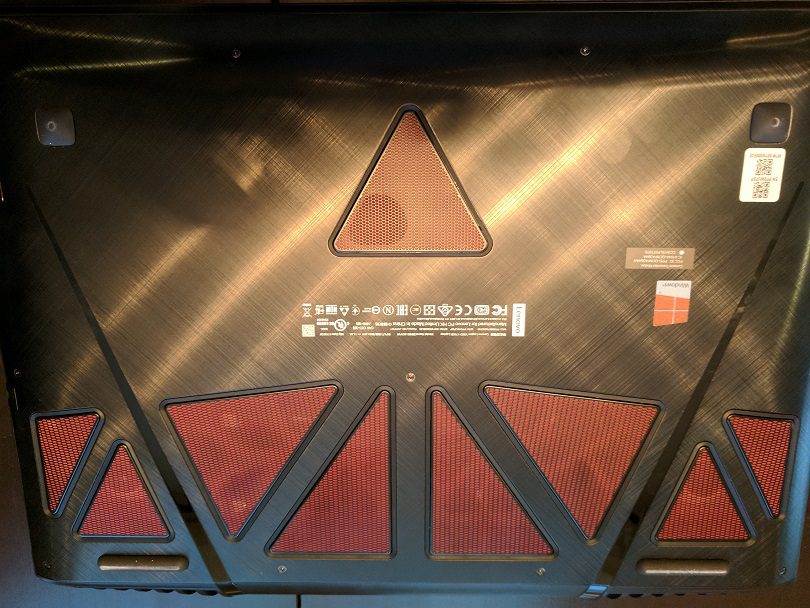 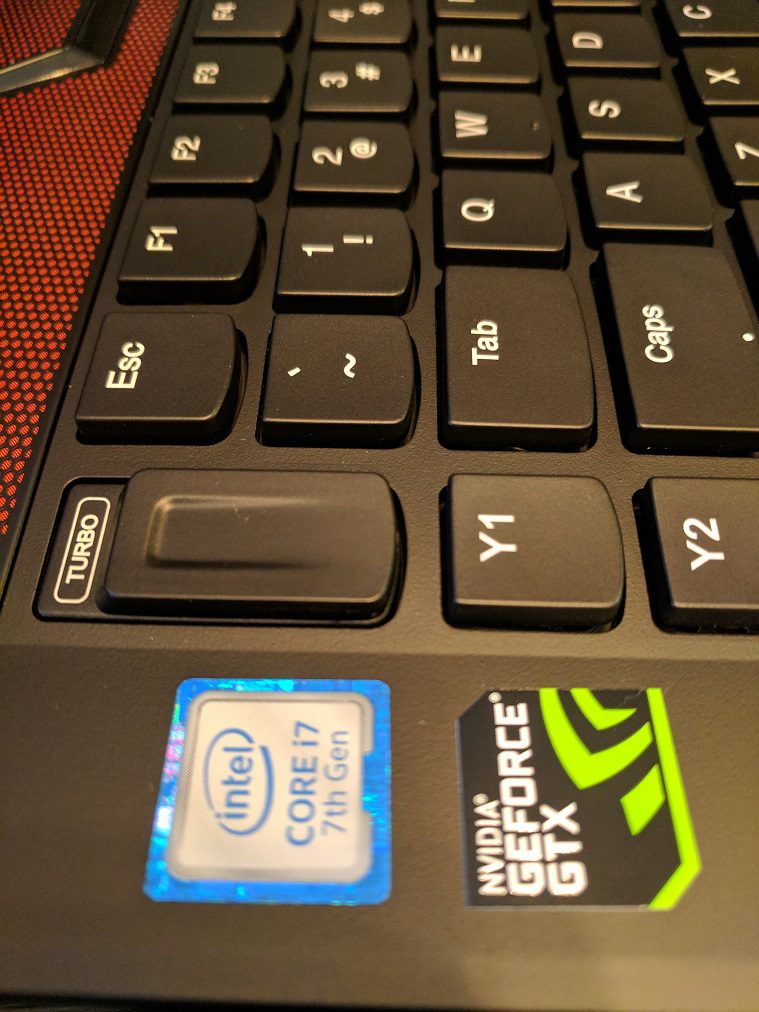 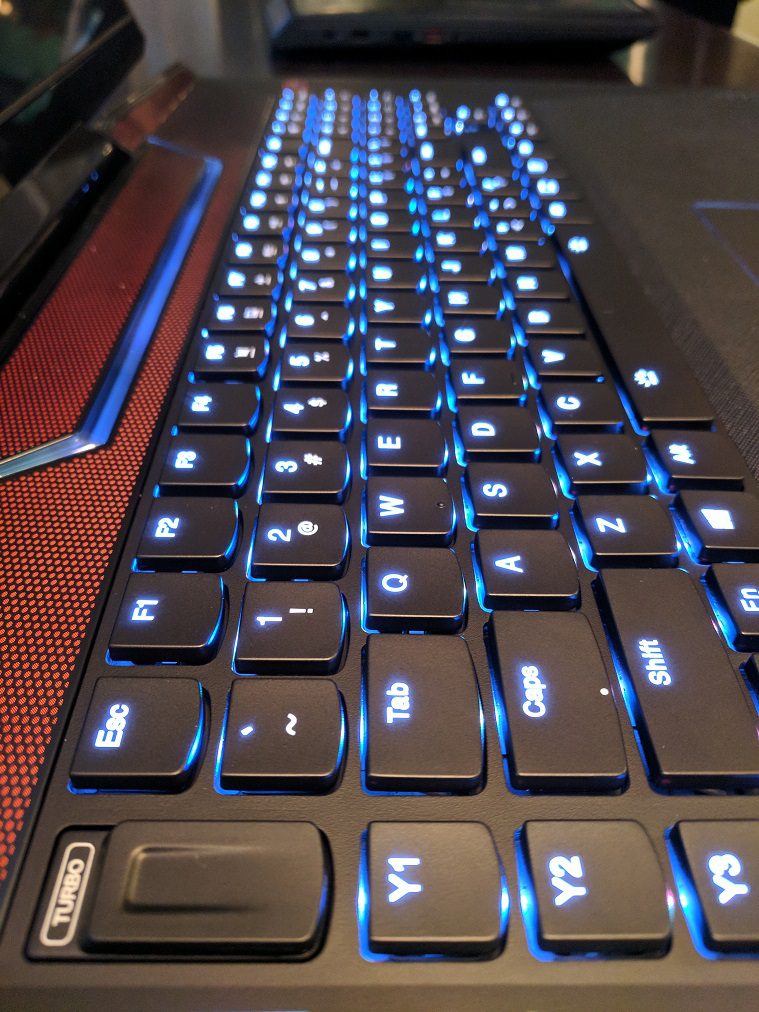 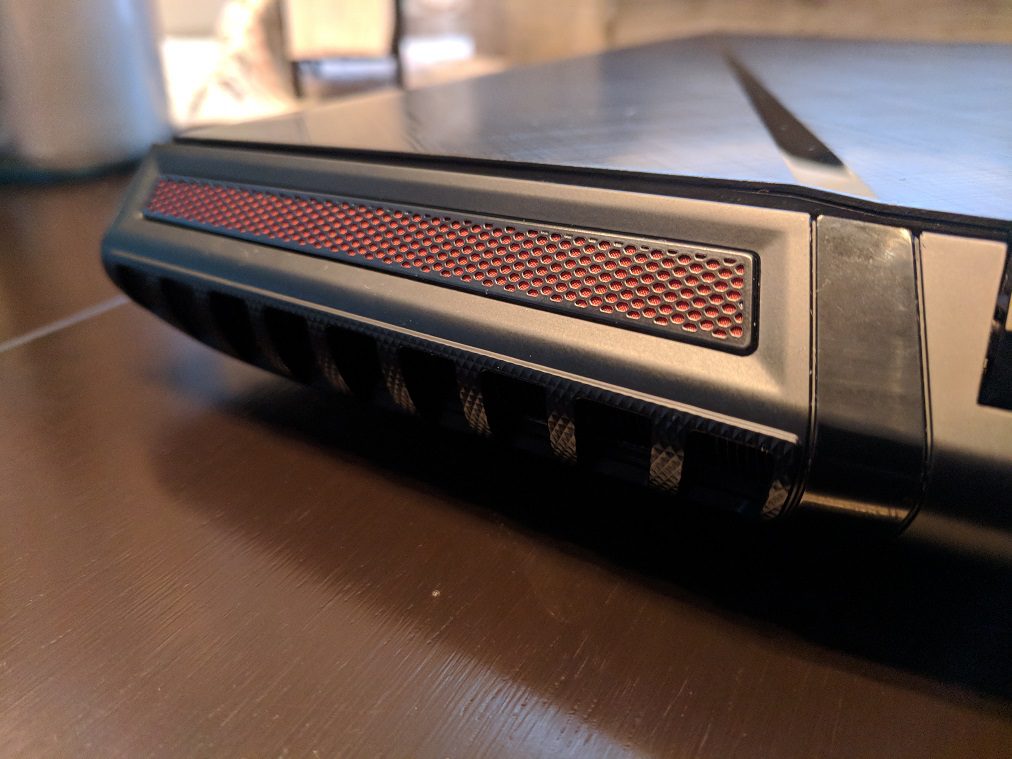 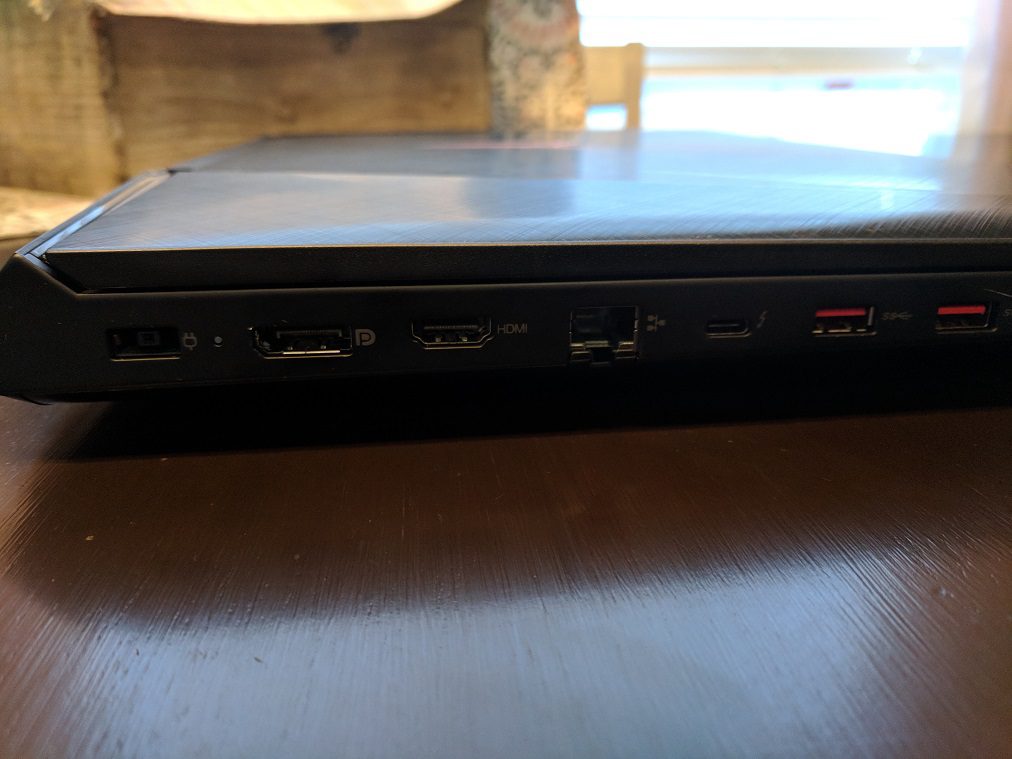 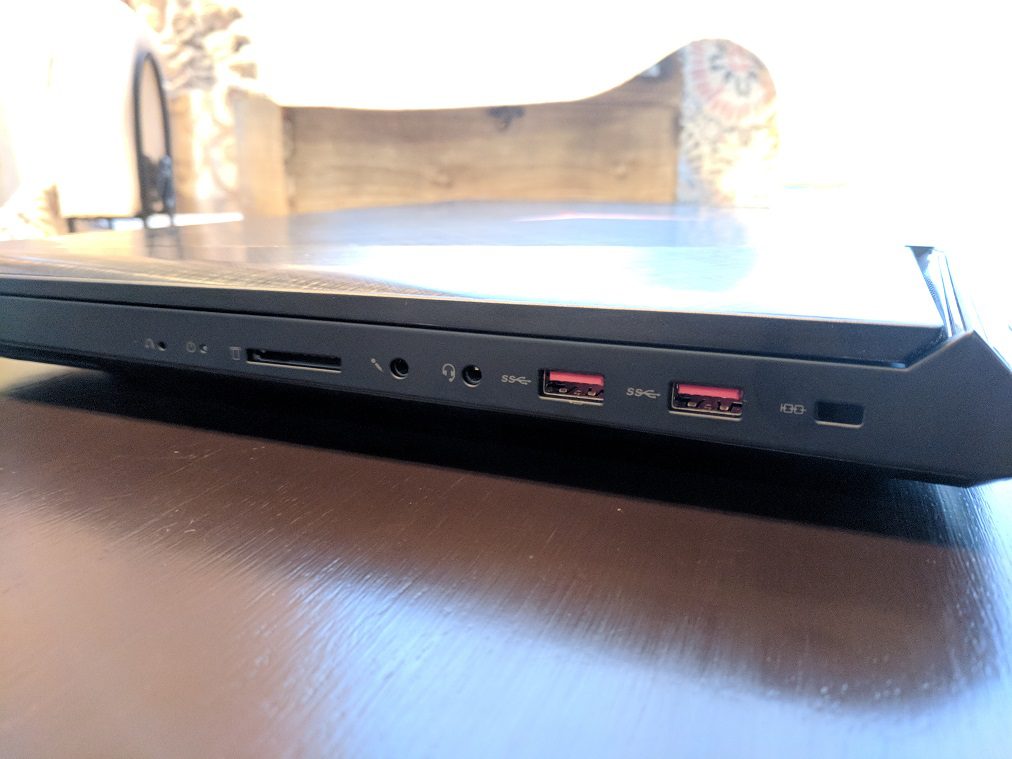 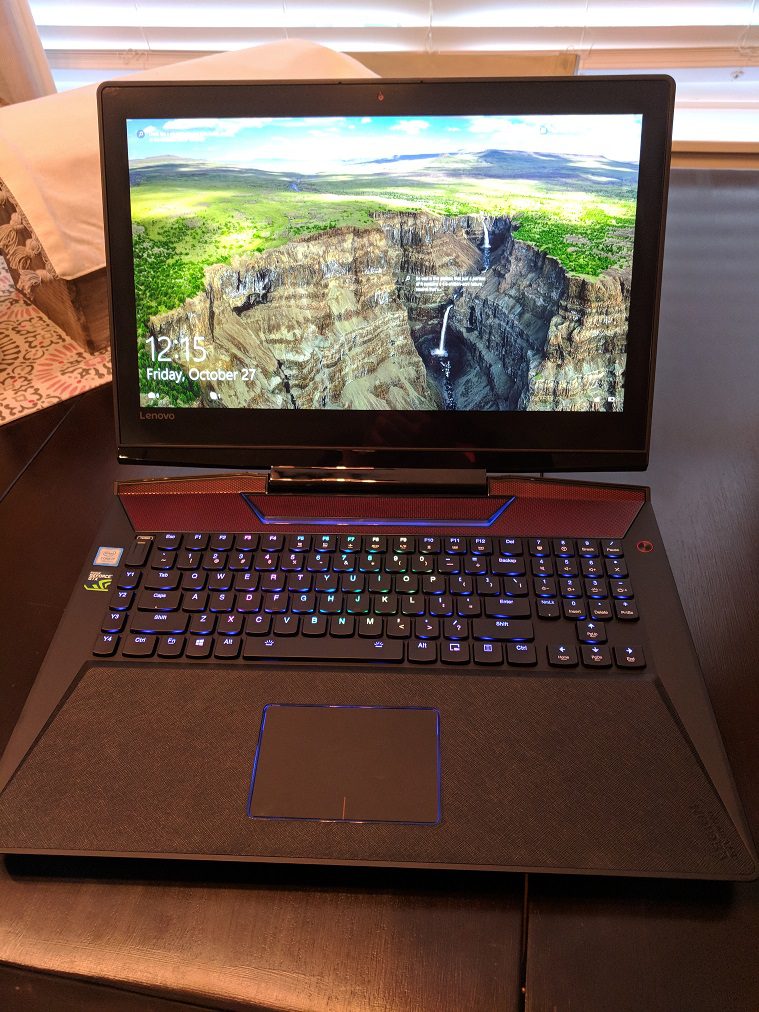 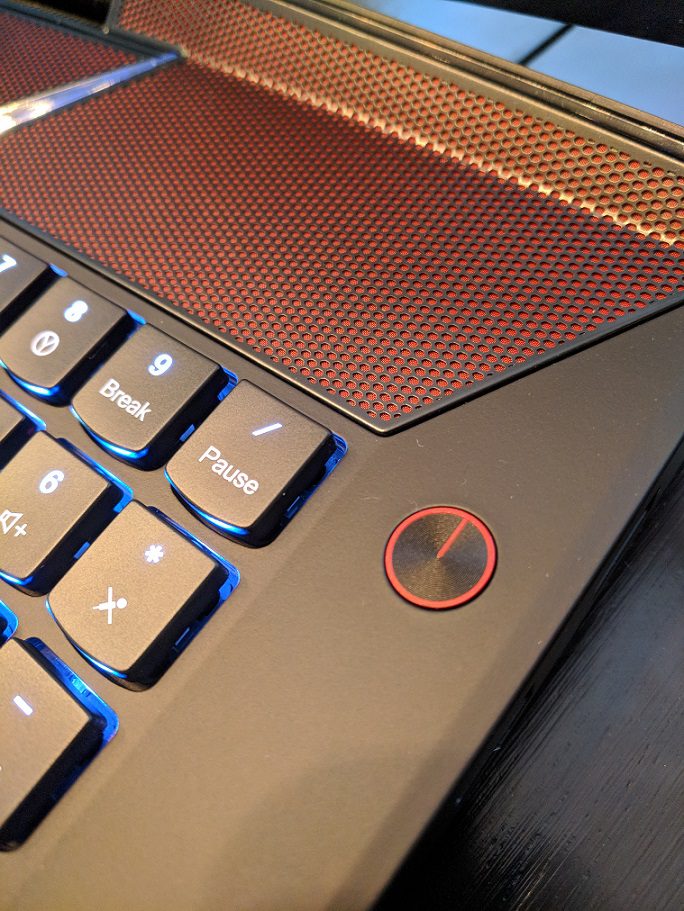 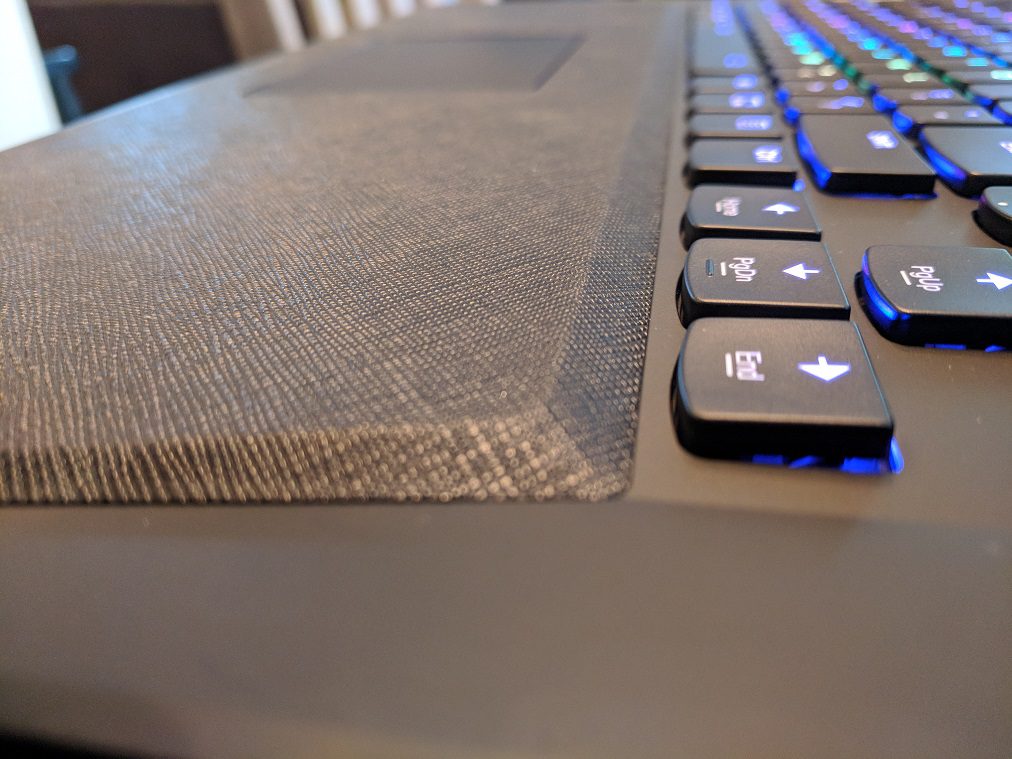 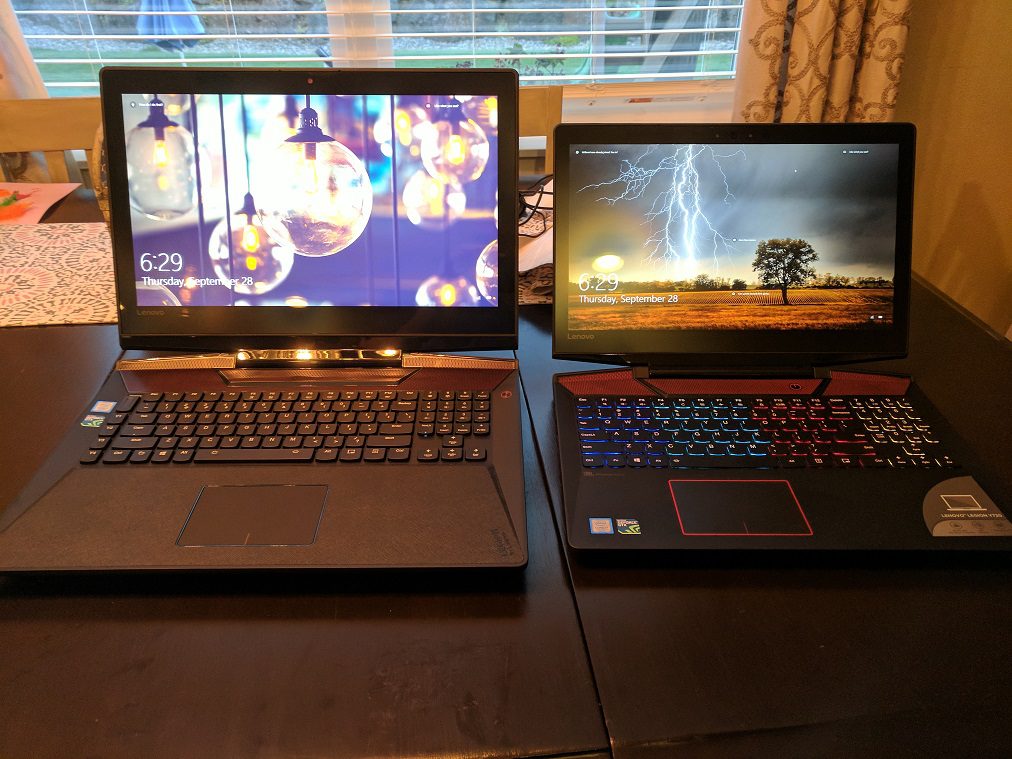 As if my own subjective observations weren’t enough, my very first benchmark test gave me some surprising results:

A Time Spy score above 5,000 is typically reserved for the desktop-grade Titan X and R9 Fury X. While a desktop GTX 1070 (meaning actually in an ATX desktop chassis) can score around 6,000. Of course the CPU is important in the equation as well. The overclockable i7-7820HK CPU in the Y920 has 8MB of Cache and can operate at a frequency of 3.9GHz. And that’s out of the box! That HK designation is important as comparable laptops may have an HQ designation. Anyhow, another consideration is that CPU+GPU does not equal performance. They’re massive contributors but when you get into the high-class of laptop gaming you start to see how the management of cooling and airflow really affect performance. What I found with the Y920 is one surprise after the other. It’s not that I couldn’t find it’s limits. Rather, I was just surprised at it’s performance with every game I threw at it: Doom, Witcher 3, Rise of the Tomb Raider, Stellaris, and many more. Perhaps the biggest surprise is how cool it ran. The Y920 never got uncomfortably hot. Holistically, the Y920 weighs a hefty 10lbs, but I think a lot of quality engineering went into it and gives you great performance at cool temps. One could argue it’s more impressive to get 10% less performance and shed 20% of the weight. In my opinion, an 8lb laptop is still too big to port around, so I would prefer that 10% performance.

Aside from gaming, the Y920 is a multitasking master. I had no sense of slowdown while simultaneously running multiple Office applications, watching Guardians of the Galaxy: Volume 2 and running Chrome with 10+ open tabs. If you want to push it further, you can use the turbo button for an additional boost.

Hardcore gamers that go mobile look for the cream of the crop of specs. They know to look for an an i7 CPU with the “HK” designation and an NVIDIA GTX 1080. So why would they consider the Y920? Sure enough, it has the HK CPU but just a GTX 1070. Here’s the deal: Lenovo got the performance recipe right in a way their competition hasn’t attempted. This is one of the best performing GTX 1070-eqipped laptops you can buy. It runs cool and quiet to boot! Lenovo managed excellent performance at a relatively good price by dropping the GTX 1080 in lieu of a GTX 1070. The size and bulk make it a challenge to travel with so consider this a desktop replacement with some mobility. 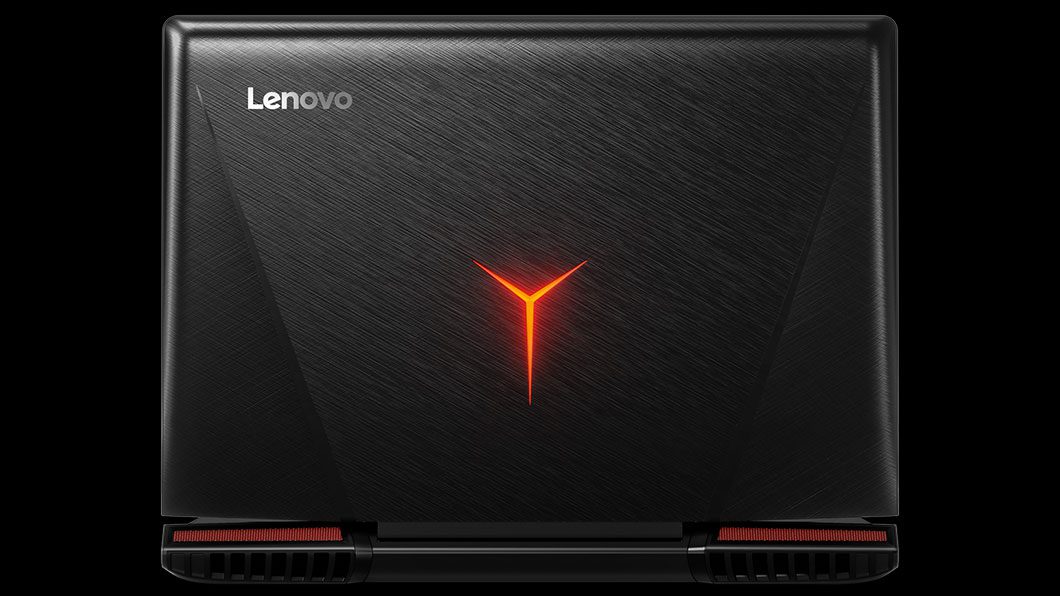