Seasons Change, But Now The X-Men Are Immortal 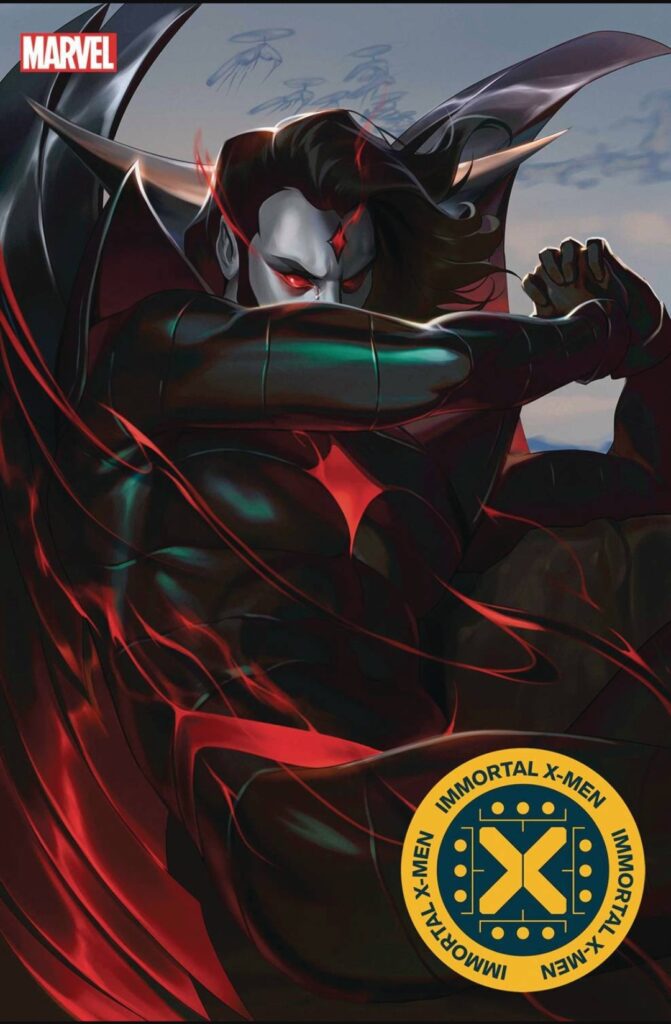 It isn’t hard to come up with an adjective phrase for a Marvel comic. And while titles like the Double Edged Blade could work others like the Responsible Ghost Rider may be a short lived series. The X-Men (and you Parker) have a huge catalog which consists of this type of title. The mutants have been Uncanny and New, to name a few. But with Immortal X-Men, the title of this new series from Marvel Comics, the mutants of Krakoa announce their new status to readers, even as they seek to hide this secret from the rest of the Marvel Universe. So don’t expect a coffee book shop vibe,because this reading takes place in Bar Sinister.

If youth is wasted on the young, then Gillen knows to acknowledge immortality you showcase the seniors. Starting our story in 1919, readers get an encounter between Irene Adler and Nathaniel Essex. Since it’s beginning in House and Powers, I feel the Krakoan era has been about balance. If nothing else there is at least mirroring and symmetry to the stories. When I saw the preview pages, and even more once I had this issue in hand, I noticed this scene mimics the X and Moira bench encounter. Except for Sinister this isn’t a pleasant surprise, Irene’s words startle him. Whatever knowledge Destiny gave to Essex later in the issue she basically implies after all this time he has learned nothing. But even if he knew everything, could he predict everything?

There is much to celebrate, and some things that cause concern, in the series debut. The previously announced departure of Magneto occurs, this allows the Council to consider a new member. If you’ve been “Keeping up with the Quiet Councillors” then you know this resignation/selection is almost at the anniversary of the last one(s), those being both Jean and {[A]}. Feel free to reflect on that for a minute. Several “worthy” candidates come forward, each could cause a change in the chambers climate. There is also a red herring, another trend I am noticing.

Comparing Immortal X-Men to other recent X titles is similar to the crew and cast of Broadway productions. If you imagine that’s my way of saying they are less vital, well if you like The Muppets like me remember it was Scooter there to help start things. The “action’ that occurs is more in line with a court case or a confirmation hearing. Lucas Werneck focuses on the characterizations of the characters, which makes each moment intense. From the look of disdain from Emma to Piotr’s attempt to look completely invested. Sinister’s words only add emphasis to the illustrations. David Curiel’s colors add an accent to Werneck’s work, seen most beautifully as the sun sets for the mutants once more(?). Plus give it up for Mouse-ter Sinister and Mis-Tortoise (or is it Mis-Terrapin) Sinister.

I can’t escape the excitement, and tension, I feel surrounds this series. Mark Brooks cover is quite the conversation piece all it’s own, as are the others. More than any other Kraokoan era comic, Immortal X-Men seems like the wave machine for the island. Writer Kieron Gillen promises complete transparency to the daily sessions of the Quiet Council in the pages of Immortal X-Men. How will the soul (of the nation) behave now that it has no fear of facing a judgement?

The Quiet Council rules the Krakoan age, for better… or worse. Now, shaken by INFERNO and X LIVES / X DEATHS OF WOLVERINE they strive to hold together, no matter how much they want to tear each other apart. Writer Kieron Gillen (UNCANNY X-MEN, ETERNALS, The Wicked + The Divine, Die) returns to the world of X with artist Lucas Werneck (TRIAL OF MAGNETO) to bring us all into the room where it happens. “It” being “the most powerful people on Earth deciding the fate of the whole planet.” Prepare for sinister secrets to be revealed and learn that some secrets are more sinister than others…

The first issue is Sinister’s show.  So if you haven’t come to enjoy the Tales from the Crypt vibe he has always given off you may not enjoy his toying with everyone, audience included.

The first issue is Sinister’s show.  So if you haven’t come to enjoy the Tales from the Crypt vibe he has always given off you may not enjoy his toying with everyone, audience included.