Sonic is Back on Top: Sonic Mania Review

Sonic The Hedgehog is back and better than ever. Sonic Mania finds Sega’s premier hero returning to his classic roots and I for one could not be more excited.

Developed in collaboration between SEGA, Christian Whitehead, Headcannon, and PagodaWest Games, the latest release in the saga of the Blur Blur is a return to the favored 16-bit era of gaming when SEGA was the hot console around the world. In Sonic Mania, players can take control Sonic, Tails, & Knuckles, all with new and upgraded moves and tricks. Every tool will be used in the fight against Dr. Eggman and his army of robots, so prepare yourself for some of the classic Sonic The Hedgehog difficulty curve. 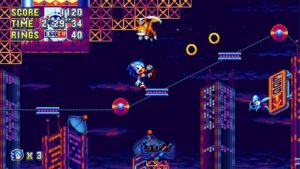 SEGA is toting Sonic Mania as “a brand new classic sonic experience” and that is the perfect description for this love letter to retro fans. Physics have been upgraded, pixels are sharper, and the speed is upgraded as we enter the era of 60 FPS gameplay; all factors that subtly enhance the familiar platformer. The updated physics also add an amazing layer playability to the Sonic games of yore that were limited by their hardware such as the Sega CD, Dreamcast, or Saturn. The power of the modern console smooths out some of the edges of earlier sonic entries. Gone is the blurriness that came with the high speeds as it is replaced with crisp graphics across the screen. Added layers of audio help amplify a beautiful soundtrack that will delight any fan of not only the series but of retro games in general. It’s no wonder diehards are shelling out for the vinyl release of these updated sonic tracks.

Sonic Mania is set across twelve zones, each with two acts. Eight of the zones are marvelous remixes of areas from earlier entries such as Stardust Speedway, Chemical Plant Zone, and Green Hill Zone, while the remaining four are brand new. That’s right, there are four new classic style levels that are just plain amazing and truly allow the player to appreciate the design and flow that is so crucial to Sonic The Hedgehog. Another great addition to the zones are the plentiful bonus stages, each of which is pulled straight from classic games featuring a Sonic model tailored to fit the era being referenced.

The first level eases you in by being nearly a beat for beat remake of the Green Hill Zone level that started it all. Right off the bat, I was struck by the beauty of the remastered pixelated visuals. Every visual flourish and remixed level is a heartfelt nod to its source material. References are sprinkled throughout the game, including a boss battle taken straight from one of my favorite games: Dr. Robotnik’s Mean Bean Machine. Visually, the gameplay reminds me of the unique design of the Sonic titles made for the SEGA Game Gear combined with the outlandish bosses and frenetic speed of new chapters like (the underrated) Sonic Generations or Sonic Boom.

Controls are extremely tight as you’d imagine from a Sonic game. The preciseness required for such technical platforming often make me wonder how the series could pull off such feats on the classic consoles. For this review, I played Sonic Mania on the PS4 and it was so technically impressive that I even found joy in watching others play. Seeing all the winding paths and alternate routes spread throughout each level just made my mind race with thoughts of replayability and the amount of intricacy that is so inherent in old Sonic titles. 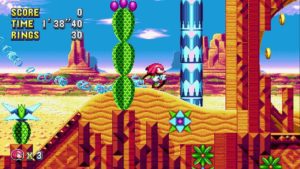 Complaints about Sonic Mania are few and far between. There are a few technical glitches here and there that can find Sonic stuck in a wall but the infrequency of these errors registers them as minor. A lot has been said of this basically being a remake or HD Remaster and in all honesty, some of the talk is warranted. Yes, Sonic Mania takes a great deal from its source material and therein lies the problem for games of this nature; how do you balance the old and the new? Remakes and Remasters are a hot topic as of late and Sonic Mania needs to be in the forefront as a positive example of what developers can do when they truly love their property. Each area is a labor of love that is not confined to its retro gaming roots and this freedom allows the team behind Sonic Mania to exceed the limitations of the past and add a much-needed layer of gloss for new gamers that aren’t relying on nostalgia goggles to enjoy Sonic.

If you’re a fan of classic style 2D platformers then Sonic Mania will be perfect for you. It checks all the boxes for a well-balanced title and exemplifies the belief that there is still water in the well when it comes to retro gaming. Here’s to hoping that the future will bring more focused and joyous playing experiences like those prevalent in Sonic Mania.

Get out there and pick up Sonic Mania, now digitally available on PlayStation 4, Xbox One, Nintendo Switch, and PC for $19.99.

What’s your favorite Sonic game? Can the titular hero double down with Sonic Forces? Comment below and stay tuned to GWW for more video game reviews and news.