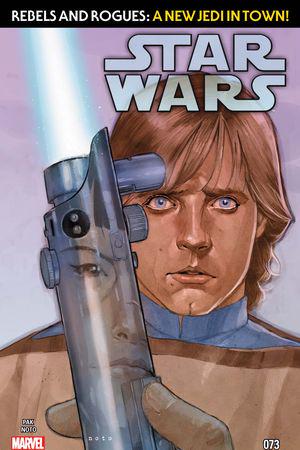 Some of the greatest moments in Star Wars comics and novels come when the reader starts to hear John Williams’ score building in their mind. The fast past action of the Saturday matinee serial that Star Wars originates from leans heavily on visuals and movement. Star Wars novels and comics frequently tell more satisfying, in-depth stories but can struggle to capture the sense of adventure. Charles Soule’s Darth Vader frequently captured that sense of scale and action and Greg Pak’s current run on Star Wars is creating that same authentic Star Wars sense of action adventure.

Issue #73 bounces back and accelerates the narrative after a slower paced set-up filled issue #72. Pak’s story arc has the main trilogy characters split between three planets and missions. Leia and Han are working a mission straddling high society and the criminal underworld, Chewbacca and C-3PO are on a planet filled with a newly discovered life form, and Luke and R2-D2 are assisting a Rebel cell. Multiple theaters of action that all collapse down to a final confrontation is a Star Wars storytelling device and Pak has set the stage well, adding some new twists along the way. Leia and Han are working with an old flame of Leia’s rather than Han. This dynamic has helped keep Han off balance and provided in-character reasons to make unreasonable choices. Pak has also placed Darth Vader on the same planet as Chewbacca and C-3PO, resulting in a collaboration between creator and droid where the droid defies the creator. Pak is able to ratchet up the tension and action as the issue goes on and successfully builds that authentic Star Wars feel.

Phil Noto’s art and colors provide similar visual storytelling devices as the films. Each planet has a color pallet that visually denotes it’s location and each character captures the likeness of the actors in the time period between A New Hope and Empire Strikes Back. Noto’s art is stylized enough to not appear hyper realistic, but is realistic enough to feel like the characters fans know and love.

Like any narrative told in serial fashion, that tension and action works best for those who have come along from the beginning. Fortunately, Star Wars can rely on the cultural awareness of these characters so that casual readers, who may pick up an issue after watching the newest trailer, can be carried away on this adventure. Pak and Noto’s pacing and storytelling successfully orchestrates the bars of John Williams’ score as the action builds to the penultimate issue next month.