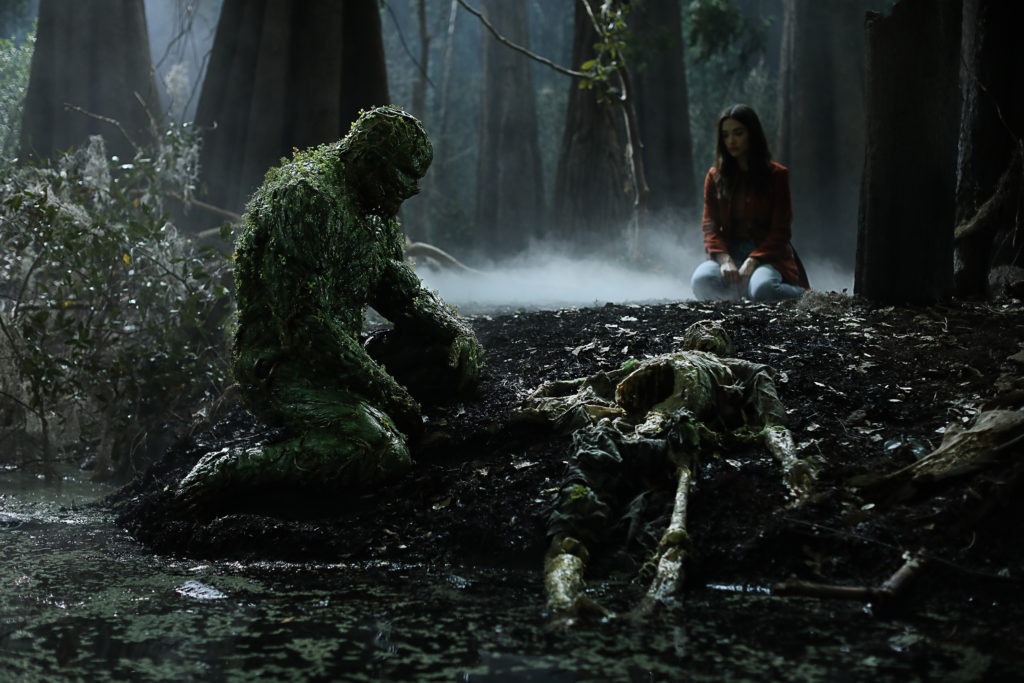 For those expecting Loose Ends to be the episode that finally puts all the elements together to provide a perfect Swamp Thing story, dream on my friends. Before you get yourself into a tizzy, know that I felt the same way. Since the beginning, I’ve been anxiously awaiting that one installment where I could shake my fist at the heavens and let out a cry of jubilation. While the show never truly nailed it, there were moments it came close. But for every taste of  good gumbo, viewers had to wade through bits of  bad bayou. Interestingly enough with the first half of Swamp Thing focusing in on a swamp flu, what ended up plaguing the series as a whole was a deadly case of inconsistency.

One of the silver linings to be had with Loose Ends is that Swamp Thing was allowed to shine. There’s muck encrusted mayhem aplenty and even a nod to a fan-favorite look. Like a soccer mom strolling through a food court of decades past, Swampy is rocking some mean shoulder pads. Really though, he’s looked fantastic this entire time. From the suit design to actor Derek Mears portrayal, the essence of Swamp Thing has been nothing short of spot on. The torch was properly passed and the heir to the role, formerly belonging only to the late Dick Durock, has been found.

As for the rest of the cast, it appears the cue cards read wrap it up. With so little Swamp Thing onscreen, they’ve been the true strength of the show. Not to fully blame the actors though as they weren’t given the best material to work with. The dialogue was weak. So much so, during a key action sequence, I wasn’t sure if the words were an homage to the movies from the aforementioned shoulder pad era, or if the writers were typing halfway out the door. Of course, the latter being the case considering the abrupt cancellation that resulted in a scramble to re-script the final episodes. Still, this was a chance to call their shot, not whiff on the swing and strikeout.

Some of the scenarios also played rather sloppy. Take Maria Sunderland for example, last week I expressed concern that her arc had ended. Might as well have. The scene provided little, aside from an appearance of the underused Xanadu and leaving the viewer to wonder how easy it is to stroll into someone’s room at a mental institution. Sure, ultimately Maria got what she wanted, but her potential was so much more than what she received.

Blue Devil parted ways with Marais to join an inevitable Justice League Dark spinoff. Being the Achilles heel of the Anatomy Lesson adaptation, it was good to see him skip town. The real treat, however, was how his home had been littered with actual Blue Devil comics. I’m a sucker for nostalgia from my youth, and those were some fun books. Unfortunately, I don’t believe anyone involved took the time to read them. I say this mostly in jest as despite Ian Ziering being a good fit for Dan Cassidy, Swamp Thing’s version of Blue Devil needed some work.

What might have been the most horrific act of the finale didn’t involve anyone’s jaw being torn off, but rather the fate of Sheriff Lucilia Cable. Forget the after credit scene (more on that later), the suspense leading up to her death was palpable. Avery Sunderland had been instructed to get his house in order and having already dealt with Maria, Lucilia was the next chip to fall. Possessing so much depth combined with the performance by Jennifer Beals, she had become a favorite character of mine. Seeing her go was an absolute gut punch.

As for Avery, what else can I say that hasn’t been put forth in my previous reviews? Will Patton was a sublime casting choice. There is a twist put forth that allows for some interesting speculation. But with no news of the series being revived anywhere else, all we are left with are useless theories.

Jason Woodrue harvested Swamp Thing’s organs last week, and now he’s laying them out on the counter like a man who just came home from the grocery store. He plans to feed them to his wife and cure her of her Alzheimer’s disease. Keeping her drugged, bound and unable to resist, Woodrue gets creative and whips up some Swamp Thing primavera. Deciding it best to be the guinea pig, he takes the first bite before force-feeding his spouse. Will this dinner date end in disaster? You’ll have to wait to find out. But Swamp Thing is over you say? Hmm…

The most beautiful scene fittingly involves Abby and Swamp Thing. He’s not Alec Holland, so their original purpose of finding a cure is gone. Yet we learn there is more that binds them together. While liberties have been taken throughout the last ten episodes translating the comic to live-action, this bit sticks the landing. They are the core of the mythos, and this moment is enough to bring a tear to your eye. Not only due to the connection they share at the series closing, but also because we won’t get the opportunity to watch this relationship explored further.

⚠️ BIG OL’ SPOILER ALERT: If you want to avoid details of the post credit scene, scroll down to the score instead of reading the next paragraph!

Matt Cable has been released from the hospital after his drunk driving accident. He visits the police station to gather a few things but instead discovers the place to be abandoned and covered in vines. You see, after eating Swamp Thing’s organs Woodrue was arrested and hauled off to jail with the effects of such a meal having bore fruit. He’s transformed fully into his Floronic Man persona. That’s cool and all, I’m just not a fan of the look. Imagine Tim Curry’s Darkness from the 1985 film Legend, fitted with Swamp Thing’s codpiece. Not the most original, nor the reveal I was hoping for after reading after reading show runner Mark Verheiden’s tweet. On the bright side, look for Floronic Man to terrorize your television set in Justice League Dark! Sigh.

So long Swampy. Sorry to see you didn’t get the sendoff the show, or the fans deserved.