Splash Report is bringing us all the details on the DC Universe upcoming series Swamp Thing, which will debut sometime in 2019.

First, the pilot episode will be directed by Len Weisman, which debunks a previous report that James Wan would be co-directing the pilot with Deran Serafin. The director change could also explain why filming in Wilmington, North Carolina was pushed back to October instead of the originally scheduled date in September.

The pilot begins with three rednecks riding a boat through the swamps of Houma, Louisiana, where something stops them from completing their trip. The leaker, Ludens, implies that it’s Swamp Thing, but stays vague. “I think you can probably guess what ensues, but let’s say something happens to them that stops their trip early,” he says in his breakdown.
After that cold open, which is said “feels like something out of ‘American Horror Story’,” the pilot keeps its focus on Houma and the people living there. Ludens says the show “has a lot in common with shows like ‘Castle Rock’ and ‘Sharp Objects'”, with Alec Holland and Abby Arcane both being drawn back to the swamp for different reasons: Abby is “a CDC medical agent who returns to, you guessed it, Houma after decades away to investigate the outbreak of a new infection that is taking over the town.” Alec is drawn back to the swamp for reasons Ludens didn’t go into, but it seems fairly obvious. Other characters include Harlan, Abby’s CDC friend, the Sutherlands, head of the Sunderland Corporation, and Matt Cable, a Houma police officer. The infection that Abby is investigating is “vomit-inducing” and it’s “causing plant growth inside of people that create their bodies to be mutilated and mixed with plant matter to produce a hybrid of grossness.” It’s a shame Alex Garland isn’t helming this show. 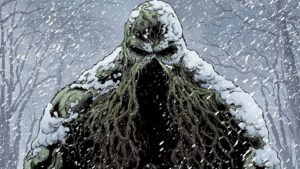 “The character of Swamp Thing itself doesn’t indeed appear much at all in this episode. He’s more of a figure causing havoc behind-the-scenes and throwing the narrative into motion. The show is far more focused on the human characters than the monster,” according to Ludens. Hopefully, the budget allows for some epic appearances later on in the show.
Casting is currently underway, and you can check out The GWW’s exclusive audition tapes that give us just a taste of what’s to come from this new DC show from James Wan.
Source: Splash Report