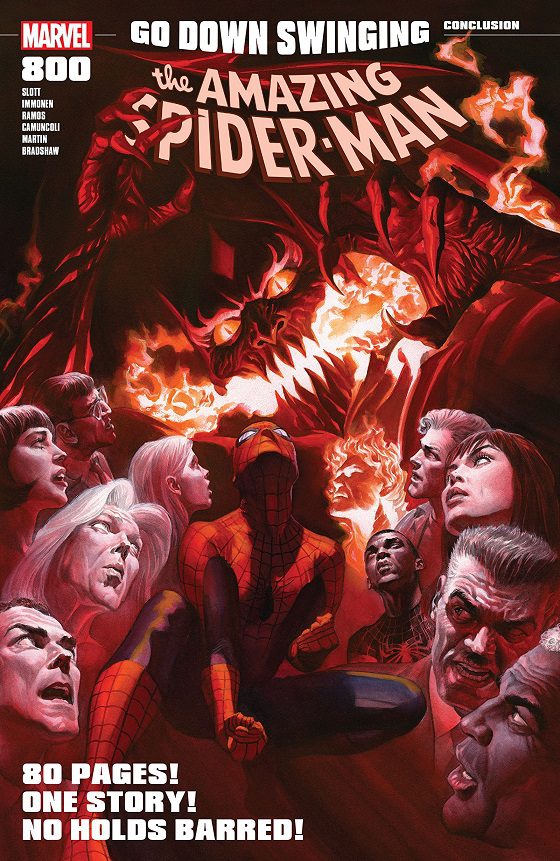 Have you read a Spider-man comic written by Dan Slott during the last ten years? Do you like Spider-man as a character? Are you a fan a good storytelling? If you answered “yes” to any of these, go and buy this issue. The issue may cost as much of as a cheap movie ticket, but the ride Dan Slott takes readers on is exciting, emotional, and a satisfying finale to Slott’s contributions to Spider-man lore.

Issue #797 started this arc with Norman Osborn learning of Spider-man’s identity. Issue #798 created the confrontation between the two and left Peter Parker battered and out of the fight. Issue #797 was the necessary narrative chapter where things look bleak and Spider-man’s supporting cast is broken and defeated. Issue #800 clocks in at 80 pages and makes the most of them. While the story arc itself has some pacing issues, #800 works well as a stand-alone comic and is masterful as a finale to Slott’s tenure with the character.

Slott rarely allows Spider-man and the reader to catch their breath in this issue. After some initial setup in the opening pages, Slott throws Spider-man and his cast into one confrontation after the other. Slott uses these smaller battles as a way to tie-in characters and plots from the last 100 issues. Slott rewards readers with nods to past stories but never stops to linger on them or drag them out for the sake of insider references. Each confrontation and each new team-up honors the characters involved and builds to the final confrontation in Times Square.

Spider-man and his allies throw everything they have at Osborn and the Carnage Symbiote, including some surprise partnerships. And there is a growing awareness that not everyone will survive. There is loss in this issue and it is earned and emotional.

Given this issue’s size, there are a number of creative teams working on this issue. The shift in styles does create some inconsistency in tone, but the artistic changes help to pace the action. Different battles and sequences use different artists. Humberto Ramos confrontations recalled the frantic climactic battles of Slott’s Spider-Island arc. Stuart Immonen’s art is stunning and provides an emotional gravitas to the final confrontation. And Marcos Martin allusions to the classic Steve Ditko style brings readers back to a promised “classic” Parker/Spider-man after Slott concludes his run.

Rarely do comics create the sense of adrenaline that an action movie climax can, but Slott achieves that here. While the “Go Down Swinging” arc may have dragged at times, this issue grabs a hold of the reader and never let’s go. Any superhero fan looking for that next great story will find it within this landmark issue.