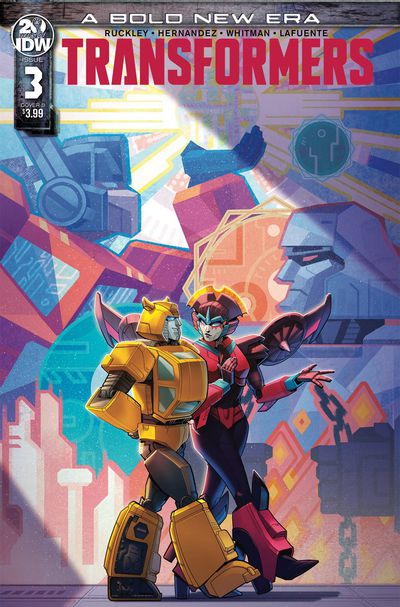 Brian Ruckley’s Transformers #3 continues to build the world of this new iteration of the robots in disguise. Issue #1 introduced readers to a world where Orion Pax (Optimus Prime) and Megatron are political opponents and the world of Cybertron has not seen death in generations. Issue #2 sees a murder mystery and a botched assassination attempt on Megatron. And now in issue #3, Ruckley continues to develop the world and set pieces in motion for a greater conflict.

Ruckley’s pace of storytelling and worldbuilding is gradual and dialogue rich. Bumblebee describes how they are constructed out of the planet and are able to change forms. Orion Pax conducts an Aaron Sorkin like walk and talk with fellow Autobots. Transformer comics have always had a rich world, but frequently relied on action and combat to move plots forward. Three issues in, Ruckely’s Transformers is more of a drama than action adventure. These dialogue-heavy pages play to Ruckely’s strength and help the reader understand this new world of Cybertron.

Have you seen this:
Eat the Rich #1 (REVIEW)

Even with this reliance on dialogue, the art team of Angel Hernandez and Cachet Witman delivery stunning visuals that feel in line with traditional Generation 1 depictions. Witman’s art provides richer colors, while Hernandez’s visuals contain a slightly washed out ascetic. Hernandez’s art is frequently outside on Cybertron and the lighter colors create an atmosphere for the planet. Both work well for the book, but after three issues they are becoming more of a contrast than a compliment.

The murder mystery progresses slowly and should work well in a collected volume, but the pace suffers as an individual issue. Between issues, Megatron has somehow learned of the murder that Pax and the security forces are frantically trying to keep quiet. This plot leap helps to build the tension, but also feels out of place in a book that is otherwise tightly scripted.

Transformers #3 is another solid step in building and expanding this world. While light on action and answers, it raises more questions that should keep readers engaged over this first story arc. Lapsed fans of the franchise can still jump on to this series and find out if there is more than meets the eye.

Have you seen this:
Marjorie Finnegan Temporal Criminal #4 (REVIEW)