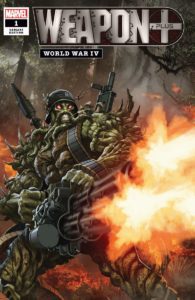 The history of the Weapon Plus experiments includes Captain America and Wolverine, who both saw a Weapon X comic in 2019. This intent of this one-shot is unclear. Is it intended to expand the Weapon Plus character roster for future storylines or is it a way to debut characters that will cameo in other titles?

Regardless of the intent, Benjamin Percy provides a strong introduction to the new Man-Slaughter character. A former journalist who was experimented on using the research of the scientist who would become Man-Thing becomes a weaponized version of that same creature. Percy packs the short story with emotion and creates a rich, human character that goes beyond the assassin intent of Weapon Plus. Hopefully, readers will see Man-Slaughter again soon.

The art on Man-Slaughter’s story sets the tone and develops a tangible feel to the pages. The inks and colors by Faucher, Deering, and Rosenberg create an organic, moss-like texture to the panels that perfectly matching the tone and topic of the story.

Ryan Cady’s Brute Force story successfully reminds readers of strangeness included in Weapon Plus’ experiments. While a super-powered animal strike force could easily veer into camp, Cady keeps the tone intentionally serious creating a team that would not feel out of place having a crossover with Percy’s excellent current run on X-Force. Cady and artist David Baldeon sneak a little self-referential camp in the final panel with a reference to the 1990 Brute Force limited series.

Weapon Plus #1 provides both the complicated character of Man-Slaughter and the camp of Brute Force. Man-Slaughter’s tale could easily expand into future issues and Brute Force ends with allusions to the future, but it leaves readers with the question of what is next for the Weapon Plus project?