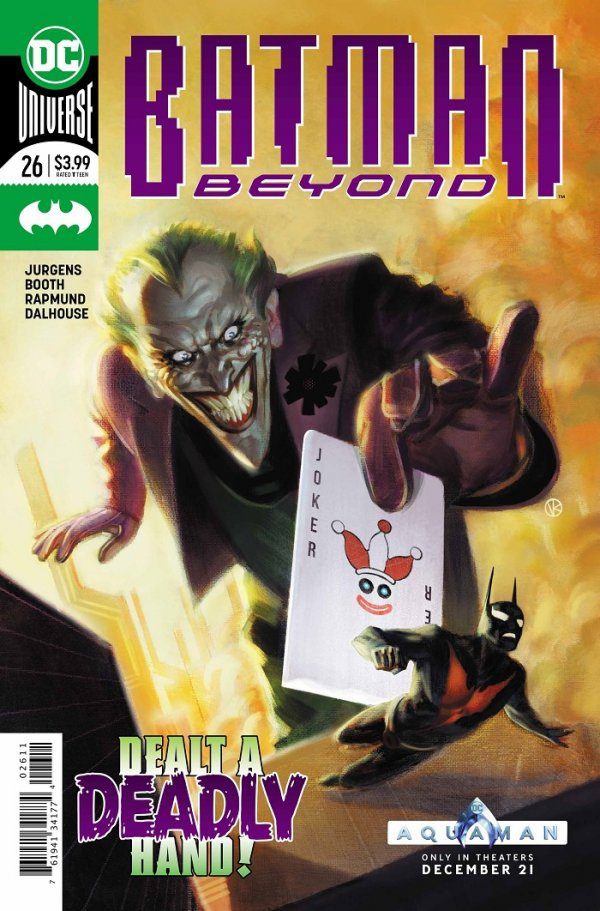 The Joker is going after Robin.

No, this is not a retelling of Batman: A Death in the Family. This is not Batman: White Knight.

Turns out, it doesn’t matter who’s Batman, what point in time it is, the Joker wants his chance at any Robin whatever chance he gets. It really is the most effective way for him to actually hurt Batman.

Though, his gripe is more with Bruce Wayne, not the Batman in Batman Beyond #26, Terry McGinnis. When in fact Terry and his brother Matt, now know as Robin, will be the ones to suffer most. Not that the Joker cares. All he cares about is Bruce.

In fact, I’m surprised he doesn’t plan to go after Terry with extreme prejudice, too, since he’s essentially posing as the real Batman. Or maybe he respected Terry. If not, we know the Joker won’t hold back, just like he didn’t against the Jokerz in Batman Beyond #25.

Going back to the Robin issue, this issue with the Joker—which none of the Bat Family has any real idea about—comes while Bruce has been taking some heat from everyone, including Mayor of Blüdhaven Dick (not Ric) Grayson, who wasn’t too pleased when he found out about the news in Batman Beyond #26.

If the Joker does capture Robin, you have to wonder what it will do to Bruce’s psyche. He’s already old and stressed about it, on top of the fact that Jason Todd was killed in this reality, but apparently never was reanimated. Something says Matt McGinnis’s run as Robin won’t last much longer.

And maybe this all has an effect on Bruce’s stance on anyone being Batman. By helping Terry do what he does he’s putting another young man’s life in danger. As much as Terry can handle it and is capable of making his own choices, the guilt may become too much for Bruce.