(Update: 6-13-18 | 4:00 pm) I had an opportunity to speak with Teddy Lee from Lenovo’s Legion product development team. Teddy has been working on Lenovo’s gaming desktops and laptops since 2015 when he worked on the Y900. I’m impressed with his personal background as well, as he grew up as a PC gamer. He knows what it means to lug a desktop, monitor, keyboard, and mouse to a LAN party. What a pain!

What I really wanted to know is why the Y series was so radically redesigned. Aside from the logo, these laptops do not resemble the last generation at all. What Teddy told me is the Legion team wanted to gather a lot of customer feedback prior to finalizing the design. Some of the most important things to him and his team were affirmed by the community: better thermal management, and rear-port access. To accomplish this, they moved the hinge forward in each of these gaming laptops. That means the air intake is on the sides, and bottom, while heat output is at the back.

Teddy also informed me a key partnership with Corsair on the Y730. Specifically, the included Corsair tuning software allows for customization of the keyboard and accent lighting as well as overclocking the RAM. The keyboard itself was manufactured by Corsair and I’m hoping I can get my hands on it soon.

(Update: 6-11-18 | 8:17 am) A Lenovo representative has informed me the below-listed max GPU config of GTX 1050Ti is all that will be announced at this time but we can expect higher GPU configurations to be announced in the future.

For years I’ve reviewed Lenovo’s gaming laptops and desktops and always felt they were underrated. What they always seemed to lack is flare. They’ve consistently been understated with black chassis and red accents. But today appears to be a change in direction as Lenovo announced three new rigs that are sure to turn heads.

For comparison, click here and here and here to see the last generation of Lenovo gaming laptops. Visually, the new laptops are a massive departure from what we’ve seen previously – a design I absolutely love. Additionally, the GPU options for the new laptops are disappointingly limited to a max config of the GTX 1050Ti. I’ve reached out to Lenovo for clarity as we should see the 730-15 with a GTX 1060 and the 730-17 with at least a GTX 1070 Max Q.

I’ll have a full review of each laptop in the coming weeks. 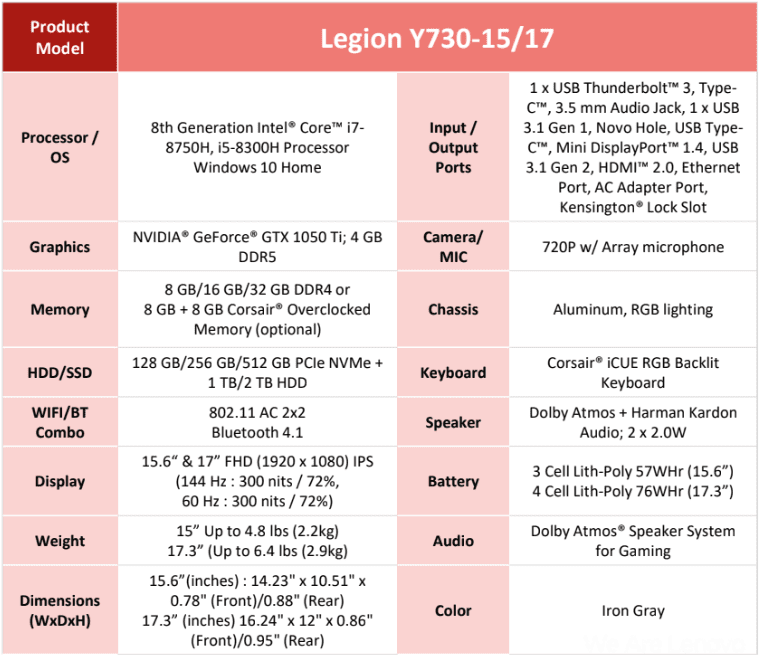