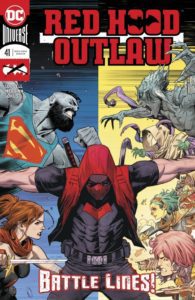 It’s great that Artemis and Bizarro are back. I couldn’t be happier. But we got that at the end of Red Hood: Outlaw #40.

Outside of their return, all we got was another kiss between Red Hood and a possessed Artemis and an anti-climactic ending to the latest Red Hood arc.

Though I will say, there were quite a few shots of Red Hood that looked great. David Messina’s version of Jason Todd was not part of the problem.

But I can’t say I was a huge fan of his Artemis. At least, her street clothes. Not because her outfit was bad, it just didn’t make sense for an Amazon to rock that look — even with her new hairstyle.

Both covers are outstanding. DC continues to produce kick-ass variants, and Philip Tan’s is no exception.

Regarding the plot: everything seemed forced and rushed. Who cares about Vessel? For the most part, these kids have been a letdown. So, it’s great that their time has come to an end, but that doesn’t give Scott Lobdell the right to cram everything together just so he can move onto the next story.