Thanks to Novy Unlimited for providing us with this review build.

Back in October, our own Kenney Newville reviewed the Nintendo Switch release of Wulverblade. He was smitten and continues to talk about the game from time to time. While Wulverblade was released on Nintendo Switch, it did not run at 60 FPS. On January 30th and 31st, that changes. Wulverblade is coming to PlayStation 4, XBOX One, and Steam (Windows).

For a comprehensive review, check out Kenney’s take on Wulverblade. He’s a history grad and loves to rub that in your face. It also gives him a rare perspective on the game.

In short, Wulverblade is sort of like Final Fight or Double Dragon. But with gorgeous graphics and air tight controls. There’s also a narrative and encyclopedia that draws you into the world of the Ancient Britons.

You may be wondering why Wulverblade would need to run at 60 FPS. It’s not as simple as “because it can.” While the on-screen characters don’t move at a rapid pace, the environment, weather and weapons do. Some of the gorgeous ambient elements include rain, mist, clouds, throwable weapons and heads (yup), and a cool influx of bad guys that show up in the foreground as shadowy black figures. 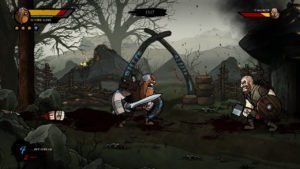 After speaking with Kenney about our individual experience with the game, we discovered the PS4 version (I can’t speak for XBOX) has a critical quality of life difference from the Nintendo Switch version: easy mode. I can’t confirm this is coming to the Switch when the game releases on PS4 on January 30th, but it would be welcomed by many.

Wulverblade is roughly a 5 hour experience but the leaderboard, collectibles and challenging combat will keep you coming back for more.