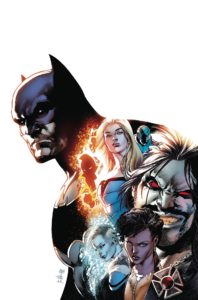 In the wake of the aftermath from Justice League vs. Suicide Squad, Batman has decided to assemble a new Justice League, one made of mortals, not gods. He is inspired by his first recruit, Killer Frost, in the concept of second chances, believing that people really can be deserving of a fresh start, even him.

Steve Orlando’s wonderful story coupled with the beautiful art of Reis, Prada, Albert, and Maiolo carries us along a journey of Batman tracking down and convincing the new members of his Justice League of America to join his ranks. Killer Frost and Batman win over Black Canary, who in turn tracks down Lobo amidst a bar fight. From there we find Ryan Choi, Ray Palmer’s former assistant, who is acting as the new Atom with a modified bio-belt, originally Batman is not satisfied, wanting Palmer instead, but Lobo notices the work Choi had accomplished and convinces the Dark Knight to add Choi to the ranks. Choi then tracks down the Ray, Choi providing some good humor as the young, energetic excited kid added to the incredible super hero team ranks, lastly Batman tracks down and seeks the membership of Vixen. The comic itself is not particularly action packed, minus some battling between Frost and Canary until Batman reveals the intent of their visit, however with the role call assembly issue its not expected to be a huge action packed book. 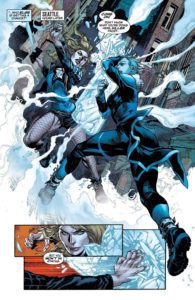 The team is put together with its fair share of tension amongst the members, largely directed towards Killer Frost’s past and Lobo’s general bombastic attitude, which I’m sure will prove for some good internal conflict amidst whichever foes the team is battling in future issues. I think the fresh take and fresh faces on Batman’s JLA is incredible, the writing, the art, and the chemistry of the cast have me hooked and already awaiting the next issue. While its not a prerequisite, I would strongly recommend readers pick up the Justice League vs. Suicide Squad series, as I’m inclined to think it will be referenced and potentially act as a catalyst for the JLA issues.

The only thing that caught me as slightly peculiar within the issue, which at the end of the day did nothing to take away from the great introductory edition, is Batman’s comment to Black Canary that he’s “started something new. A different team. Mortal, not gods.” Which granted, none of the new members are gods, however if we look at the roster:

Killer Frost – Metahuman with enhanced cryokinesis, the control over temperature, ice, a modified form of water, you know the thing that covers an immense amount of the planet and makes up the majority of most living things. Needless to say, as proved in JL vs SS, and as exhibited by other characters from the other side of the comic fence who share her ability, cryokinesis is one incredibly powerful ability. Even to an extent, depending on the writer’s creative license with her ability, control over organic ice and water can borderline on immortality.

Black Canary – Metahuman, formidable fighter, ability to emit a supersonic scream that could potentially rupture internal organs, yes mortal, but with the intent, she could do as much damage as some gods.

Lobo – depending on if his origin and powers have been retconned or not, I’m pretty sure Lobo can heal from anything and essentially banned from Heaven and Hell, while he may not be a ‘god’ mortal, the last Czarnian is not.

Ryan Choi – Atom round 2, genius inventor who can shrink microscopically and has apparently displayed the ability to travel through electronic devices, an expert in Nanotechnology can potentially find a way to escape into the web similar to a way Cyborg could if he needed to escape his physical body, potentially re-downloading into a replicated physical form, essentially displaying the possibility for a variation of immortality.

The Ray – Metahuman who manifests as light and energy, which borders on the edge of immortal-esq attributes.

Vixen – blessed with a scared totem that gives her the ability to harness the skills of the animal kingdom. Anytime you begin to dance with mystical objects, you get into magic, magic almost always, finds a way to circumvent death, making Vixen into a mantle of almost deity level standing in her culture.

So in a nutshell, Batman, wanting to build a new team comprise of mortals, not gods, has assembled some of the most powerful, unstoppable, limitless entities in comic lore, just those who may be under rated by the casual reader. Not that I’m complaining, Batman’s new Justice League of America consists of some of my favorite characters who I feel deserve to display their power on a much higher platform than they’ve been able to previously. I just was amused by that one line of dialogue as the roster continued to expand.

I was very happy with this title and will unquestionably be reading this series in its entirety, the dynamic of the team makes for some incredibly interesting team ups and conflicts which will be sure to leave readers very satisfied.

Rebirth continues to give the comic book readers some incredible titles, and our new JLA is no exception. Stay tuned to see how earth’s new defenders manage to coexist and what threats they will have to band together to face.