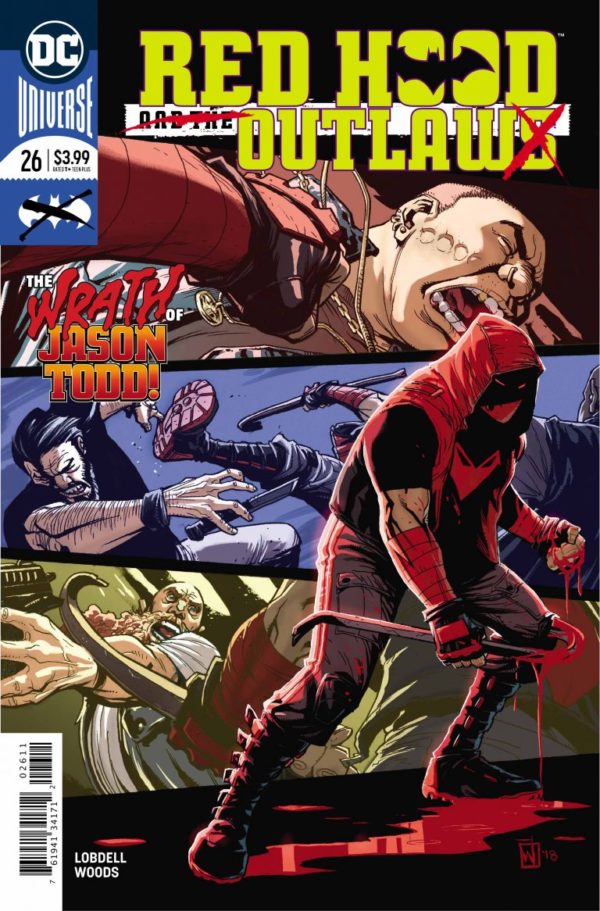 Whether you like Jason Todd’s new outfit or not (and here’s how I feel about it), I think every avid fan can agree Red Hood and the Outlaws #26 was much needed for the character.

Above all else, what’s always separated Red Hood from the rest of the Bat Family is he’d play executioner. And even when he didn’t cross the line, Jason will snuggle right up against it. Sometimes he’d leave victims in a state almost worse than death.

Well, that Red Hood is finally back. And by no means did Scott Lobdell and Pete Woods ease us in either. This is definitely some of the most graphic violence we’ve seen from Jason Todd.

And if you expected him to rely solely on his crowbar and katana, you were wrong. Jason gets pretty creative in both major fights throughout the issue. And that’s what most of Red Hood and the Outlaws #26 is about: fighting. More than ever, Lobdell and Woods had to display what direction the character was going in.

We already knew he was looking into the new crime group, Underlife, but a lot else had happened. He shot Penguin in the face from point blank in for all of Gotham to see. His relationship with Batman is non-existent at this point. Artemis and Bizarro are gone.

We needed to know how Jason was handling everything. We didn’t get much of that in Red Hood and the Outlaws Annual #2. It was more of a distraction and reset.

Now we know: he’s not exactly handling his new situation in the best manner. But I don’t mind that for a second. In fact, I’d say this is the closest thing to Jason’s original Red Hood since he formed his first band of Outlaws. We’re talking Batman: Under the Red Hood and Batman: Red Hood - The Lost Days level. Only I’d argue more graphic.