(There’s a major Nightwing item in Batman Beyond #27 that you could’ve very easily missed in passing. That will be addressed at the end of this review.)

The Joker has always seemed like a big picture kind of guy. Well, don’t let anyone ever tell you he’s above being petty just like the rest of us. The Joker forced one of the Jokerz to suicide bomb a novelty shop by threatening the aforementioned imposter’s daughter in Batman Beyond #27. And he did it all because the owner supplied the Jokerz with the necessary props to pretend to be the real Joker. I mean, a guy’s gotta make a living, right?

While we’re on the subject of the Joker, he looks really young in Batman Beyond #27. At least, he looks really young considering how old he is at this point. However, everyone appeared to regain some of their youthfulness Brett Booth took over as artist in Batman Beyond #26. Hopefully, he stays on the project because he’s done a great job with color artist Andrew Dalhouse.

Getting to the bulk of things, the Joker wants to bring Neo-Gotham back to its glory days. By that he means: turn it into the dumpster fire it was when he used to fight the “real” Batman. Because not only is he not particularly fond of the city’s new look and feel, he also isn’t too keen on the new Batman, his look and the extra tech he has. Which, as usual, illustrates his obsession with the original Batman. The only way the Joker has always been able to have any stability in life is by creating chaos that only one man could every handle.

But now that’s all gone. And the Joker doesn’t appear to be handling all of this too well. However, it did inspire him to make a new toy that incapacitated Robin. Can’t imagine Mayor Dick Grayson will be happy to learn another Robin is seriously injured under Bruce Wayne’s care. Let’s pray he doesn’t eat a crowbar or take a bullet to the head.

Before getting to Grayson’s significant comment, Terry McGinnis and Melanie Walker are kind of a thing now. It’s complicated, of course. It seems like it could be a good fit, given they know everything about one another. Hopefully, Terry isn’t so quick to muck it up.

Now, on to the Nightwing note. When Matt McGinnis left to find his brother before confronting the Joker, Dick addressed Bruce’s comment that Robin would be fine in this fight by saying, “Until he takes a crowbar to the face. Or a bullet to the head. The sad truth is that things don’t end well for Robins.”Unless he’s done it in another series, this is the first time Dick Grayson—not Ric—has acknowledged being shot in the head. So for those who can’t stand Ric Grayson and are worried their beloved Dick Grayson is lost forever, this is proof he’ll be back. Maybe not as Nightwing, but certainly as Dick Grayson, at the minimum. 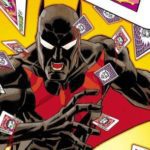 EXCLUSIVE: Paul Haggis Has Contributed To The ...